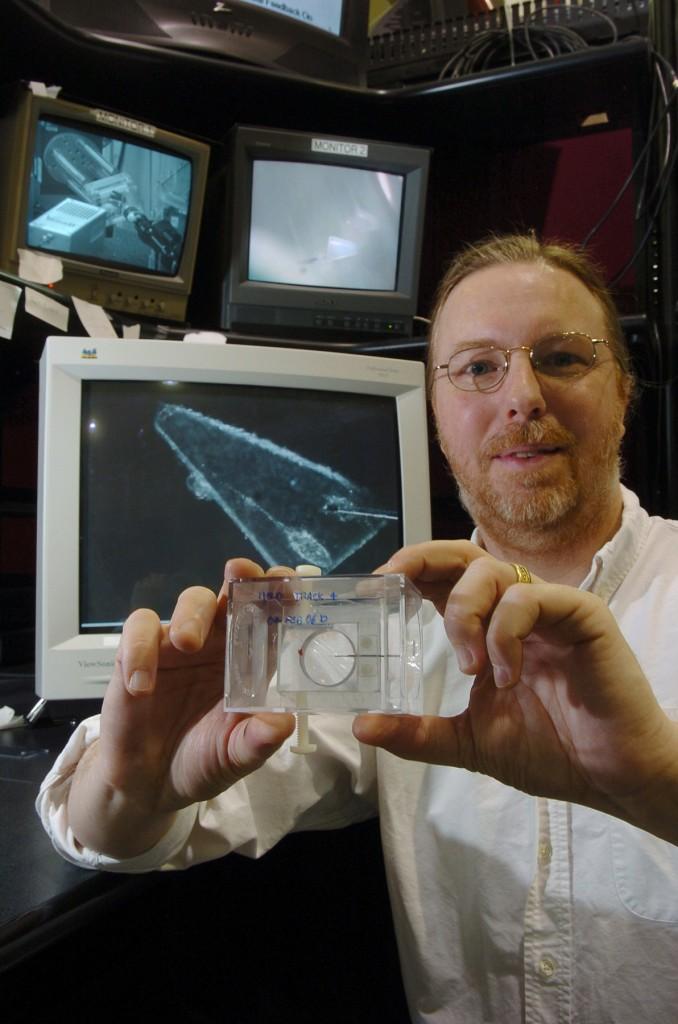 Matthew Newville inspects a sample from a piece of comet. Newville has been involved in many different research studies with other scientists from around the world.

Matthew Newville, Class of 1982, went from West Linn High School student band member to being a physicist working at Univeristy of Chicago. From a young age Newville was interested in science and math because his father was an engineer. He started college in electrical engineering and later migrated to physics.

Newville moved to West Linn in the winter of 1981 with his family. The city and school looked different then, but many of the same classes were offered.

“I remember some event around graduation where the principal or one of the teachers said something like ‘half of you will work in industries and fields that don’t exist today’.  I didn’t have a good idea of what I wanted to do, but knew it was in the ‘new half’,” Newville said. “As it turns out, I work in a field that was very new in 1982.”

Newville was involved in the band program at WLHS. He played the trumpet. He remembers having great and encouraging teachers throughout his high school career.

“I liked the history and physics classes there the most, but had more fun in band.  The lunches were really bad,” Newville said. “The physics teacher and two math teachers I had at WLHS were great and definitely encouraged me to go into science and engineering in college.”

“I think that decision to do physics instead of engineering was because I liked the more abstract, mathematical part of physics compared to engineering,” Newville said.

Newville works as a research physicist at a large x-ray facility called a synchrotron that provides scientific tools for physicists and scientists all around the world. He works on physics research with other scientists from different fields of science and builds and runs x-ray instruments for other scientists to use.

“I get to help design the experimental equipment and run experiments and work with many different amazing people,” Newville said. “I also get to visit and share ideas with people at similar x-ray facilities all over the world.  That’s really fun.”

Newville has collaborated with other scientists on projects looking at how arsenic gets into drinking water in Bangladesh and on chemical analysis of tiny pieces of comets captured by the NASA Stardust mission.

“The way that math can be used to describe the universe is still pretty amazing to me,” Newville said. “Scientists often get really worked up about something not being right and have heated discussions about the craziest things, which is really interesting.”

Newville finds that working on many different research projects and creating relationships with many scientists around the country and world to be one of the rewarding things that came out of being a physicist.

‘The way that electrons are arranged in atoms and communicate with one another and with light is still fascinating.” Newville said. “Starting from some simple concepts, it quickly becomes very, very strange.   Yet this determines almost everything we experience in the world. For me that never got boring.”