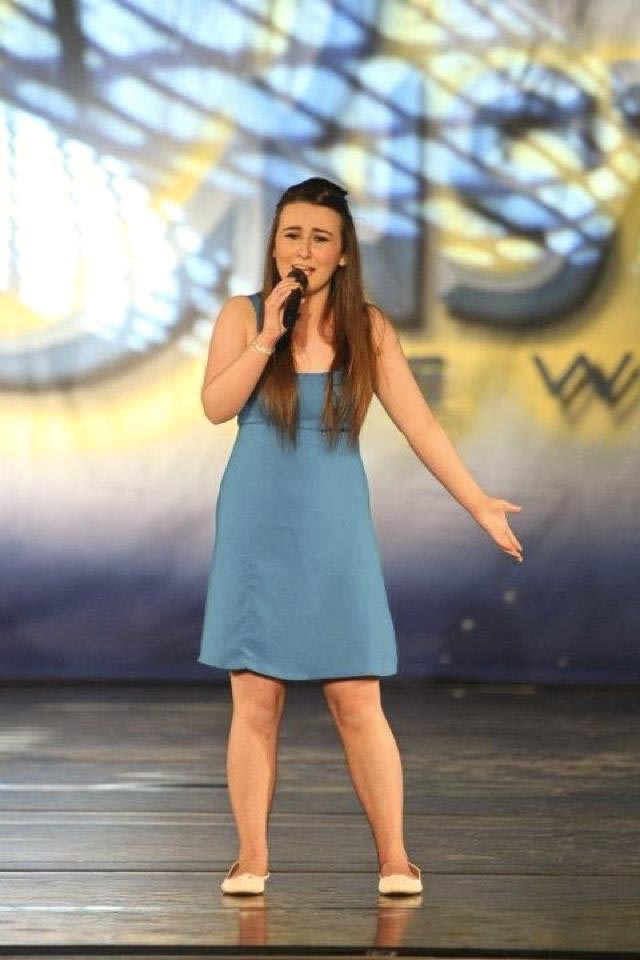 The lights go down. Suddenly, a spotlight centers on Blake Slover, sophomore. She looks out at the crowd, soaking up every minute of it. This is what Slover lives for. She is a singer who has performed in a wide variety of different competitions and has received national acclaim for her talent.

Slover has a pre-performance routine. Before going on stage, she always does 10 jumping jacks. “Whether it be before a dance, a play, or singing it always seems to help,” Slover said. “I get more calm and shake out the nerves.” This routine has proved successful, according to Slover, as she has been awarded a wide variety of honors.

“The awards I have won that I am most proud of have been when I received third in Portland Teen Idol in 2010 and being the two time National Vocal Winner for Spotlight Dance and vocal competition,” Slover said.

From Missouri to Oregon, from music showcases to musicals, Slover has shared her musical talents. “I’ve sung at numerous places, but my biggest highlights of my performing career are singing the National Anthem at the Portland Beavers baseball game at PGE stadium when I was nine years old,” Slover said. Some other highlights include singing in Catalina Island, Calif., Portland’s Parks Teen Idol, the Oregon State Fairs and a national competition in Branson, Mo.

Adding to her various achievements, Slover also participated in her first production this year, where she was able to show her versatility not only in singing but in acting as well.

“‘Kiss Me Kate’, where I played Hattie, was my very first production, and I’m so happy I got to be a part of it and meet so many great people,” Slover said.

According to Slover, this show readied her for her future. “In ‘Kiss Me Kate’ I got to meet lots of people,” Slover said. “I learned a lot about what it was like to be in an actual production, and it prepared me for what I might want to do later in life.”

Slover has been singing for nearly her entire life. “The Wizard of Oz” may be just movie to many, but to Slover it has much more importance. It marks the beginning of her musical career.

Slover’s interest in music just escalated from that point. Even at a young age, Slover’s love for music was more than obvious.

“When I was little I would always make my family and friends watch little concerts I would put on, and I annoyed whoever was in the car with me by singing any song I could think of. So, my mom signed me up for voice lessons,” Slover said.

At this point, she passed through many different vocal coaches. Her first teacher “wasn’t great,” so she began a search for the best teacher that she could find. She felt it was important to have a great teacher to guide her.

“After my first bad teacher, I tried three other voice teachers,” Slover said. “Then, finally, a family friend recommended my dance teacher, Kathleen Van De Veere. She taught her lessons an hour away in McMinnville, but after hearing how good of a voice she had, I finally convinced my parents to take me.”

Slover has been taking classes from Van De Veere since she was seven. These eight years have been well worth it, according to Slover.

“I have learned so much,” Slover said. “She is well worth the hour drive every other Saturday.”

According to Van De Veere, “her most amazing trait is really how humble she is, even though she is so talented, and that’s amazing for anybody interesting in show business.” Slover adds a unique flare that many run-of-the-mill singers do not.

Along with this trait, Slover has also displayed other traits that will further her musical career, according to Van De Veere. She has shown a wide variety of merits which will allow her to truly succeed in the musical field.

“Her work ethic is phenomenal,” Van De Veere said. “She really puts her heart and soul into it. She gives it a lot of passion and determination, and she brings a lot of stage presence in whatever she’s doing. She’s a great chameleon. She can be a ballerina when she needs to be; a hip hop dancer when she needs to be.”

Throughout their time together, Van De Veere and Slover have grown very close. “Her mom and I all traveled to NYC (New York City) to see some shows a couple years back. She visited the school I graduated from [American Musical and Dramatic Academy in Manhattan] and we saw a lot of shows. It was very inspiring.”

They are currently working on the song “Breeze” from “In The Heights,” which Slover will perform at upcoming competitions. “[The song is about] a girl who came from a really bad neighborhood, who was very smart, and she’s very concerned that she let her parents down and the whole neighborhood down,” Van De Veere said.

According to Van De Veere, this is her best song yet. “This song is her ultimate winner,” Van De Veere said. “She sounds so beautiful on it.”

Slover has many competitions coming up, like On Stage New York during the last weekend of April and the Van De Veere recital, which is at West Linn High School in May and McMinnville in June.

Slover credits her success primarily to inward motivation; she loves to sing, and this is why she does it.

“To be honest, I don’t really have someone to motivate me,” Slover said. “I sing because I enjoy it. I would love to pursue singing as my career, because it is when I feel the most like me. I’ve had people influence me along the way, but I mainly do it for myself.”

Looking toward the future, Slover would love to pursue a career in music.

“I used to want to be on broadway, but now I’d really like to pursue something more individual,” Slover said. “I’d love to be a singer when I’m older, but I’m also interested in journalism as well.”

Slover’s interest in music branches from the feeling that she experiences when she performs. “I love performing because its the one time I feel most comfortable,” Slover said. “Singing is what I know I’m good at, and I am most confident at being able to sing in front of people. Entertaining an audience is what makes me the most happy and any career I could get involving performing would be great.”