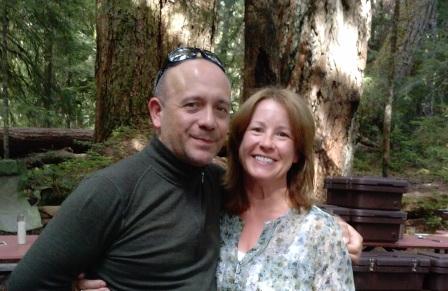 Love was in the air this summer when Leah Martin, social studies teacher, and Michael Torres said “I do.” Most would think of a traditional white wedding in a chapel but not these two lovebirds. They camped at Mt. Rainier and then went on a backpacking honeymoon. “During the honeymoon I felt very proud of the boys.” Martin said. “It was their first back country camping trip and they were positive and really embraced the adventure of it.” For most that would seem odd but for these two it was just a normal weekend that they could spend with their family.

The couple met at running Hood to Coast which is a relay race from Mt. Hood to the coast. Torres was a friend of Martin’s brother and joined his team, then when her brother needed more members Martin and her son Connor, age 20, said they would join.

What you could say is that they met while one adventure set and wanted to marry in just as an adventurous fashion. The chosen place of Mt. Rainier was because Torres used to work as a camping tour guide there. They also both enjoy backpacking and they wanted to incorporate what they love into their wedding and honeymoon.

With the joining of Martin’s and Torres there also was a joining of families. Martin’s has a now 20 year-old-son, a class of 2011 graduate, and Torres has a nine-year-old son named Sean. “Joining of the families was pretty easy” Martin’s said. “Mostly since Connor is in college so it was just Sean, Michael and I”

There was also the decision about where they would live. Since Sean went to school in Vancouver, Wash. , Martin and Torres made the choice to live in Torres house which was located there. They both have to make a long trek to work but they find it worth it at the end of the day because Sean didn’t have to leave his friends behind and start anew.