Although she had a goal of becoming one of 15 Rose Festival princesses, never in her wildest dreams did Emma Waibel, senior expect to become the Portland Rose Queen.

As a part of her reign as queen Waibel is attending the yearly Pendleton Round-Up festival. The Round-Up, which features a parade and events and has been happening since 1910 and it is the biggest round-up in Oregon.

“The Pendleton Round-Up and the Rose Festival Foundation have a great relationship, so they always send their court here to Portland for two days and we host them, and then they do the same to us,” Waibel said.

This year, the Pendleton Court visited the Oregon Zoo, going behind the scenes to pet the penguins and feed the polar bears.

“We don’t try to outdo each other, but we definitely try to impress each other with our cities,” Waibel said.

When the Rose Festival was hosted in Pendleton, they rode horses and “had the most amazing barbecue,” according to Waibel. “We also got to dance with cowboys.” Waibel adds.

When Waibel arrives on Thursday evening, a welcome dinner will be held for her and the other members of the court.

“The Pendleton Round-Up and the Rose Festival are a part of the Northwest Festival Alliance, so there will be representatives from every festival there,” Waibel said. During the weekend, Waibel is visiting various events and participating in their parade.

“I will be able to ride in a wagon, which is pretty exciting,” she said. “All they ask me is to have a cowboy hat, and cowboy boots on and to enjoy the festival.”

Waibel feels like it’s “a huge honor being the queen. Although I really dislike being in the spotlight, having my picture taken, etc., it’s pretty fun to be considered a local celebrity and to have little kids look up to you and adults congratulate you,” Waibel said. “I love carrying on the legacy of 99 other amazing women.”

Waibel’s responsibilities vary from month to month. During the summer, she went to local fairs and parades like the Sandy Mountain Parade and the Tillamook Dairy Parade. However, during the school year, Waibel participates in only one event a month such as auctions and the Prime Minister’s ball, But once June hits Rose Festival season begins.

“Sometimes [the events are] not always things that I would choose to do in my own time and I tend to miss things due to Rose Festival events, but it is always worth it!” she said.

In February (during the Chinese New Year) Waibel will travel to Portland’s sister city, Kaohsiung, Taiwan. Kaohsiung sends representatives from its city to Portland for the Rose Festival, so Waibel might also traveling to Taiwan to participate in its festival. 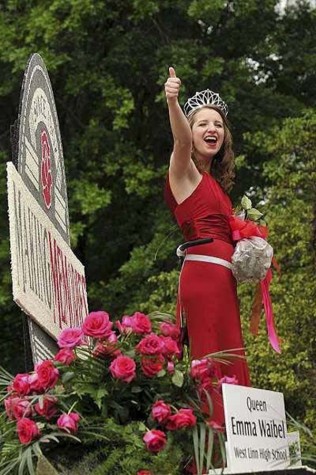