“Home for the Holidays or Bust” 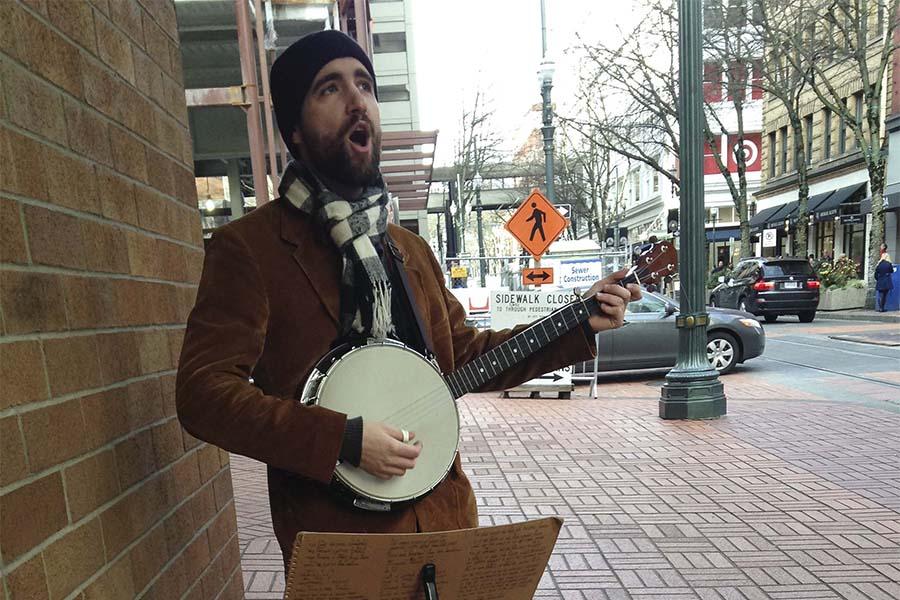 John Ott, street performer, hopes to return home to Kentucky for the holidays by collecting spare change from Portland citizens. Ott's parents and siblings are excited for him to return after not seeing him since he moved to Portland almost four years ago.

“Somewhere elsewhere across state lines, I sit and drink to pass the time. Nowhere to go, nothing to see and now I’m free.”

On a bitterly cold street corner in downtown Portland, Ore. John Ott, street performer, strums his banjo and sings, closing his eyes and imagining his hometown in Kentucky. The piece of cardboard leaning against his open guitar case reads: HOME FOR THE HOLIDAYS OR BUST. 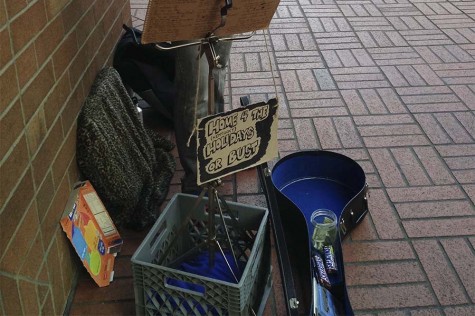 Attracted to the artistic opportunities Portland has to offer, John Ott, street performer, came to Oregon nearly four years ago and hasn’t left since.

Ott’s parents as well as his brother and sister are eagerly awaiting his arrival after hearing the news of his return a couple weeks ago, “I told them I’d be home for Christmas,” Ott said. “So I plan on going regardless. But I’m hoping to raise enough money to not break the bank.”

Ott started playing music after being inspired by his cousin in high school. “My cousin got into music first and I was actually more into drawing,” said Ott, “He really wanted to make a band and kept pressuring me until I finally gave in.”

Ott originally played the guitar but once he arrived and saw how popular the banjo was in Portland, he transferred his affections. “After I started playing I realized how awesome this instrument was and I’m in love,” Ott said. The way he plays the banjo is similar to how he plays the guitar. “I mean, I can’t do the fast finger changes on it yet but I’ve got the basics down,” Ott said.

He plays in numerous areas around downtown Portland and finds that covers of popular songs and Christmas carols are most popular. But writing and singing his own music, like his original song “Across State Lines,” is Ott’s true passion.

While it will always be a dream of his to become a truly successful singer, as in a record deal and actual shows, for now Ott is content to make just enough money to make it home.

While he graciously posed for a picture, someone commented that Ott should try acting.

“Believe me, I’ve done that too,” he laughed. “It doesn’t pay the bills either.”