Growing up with notes and keys makes its allegrezza exit

Rochelle Biancardi, senior, will be graduating from West Linn but plans to continue expressing her passion throughout college 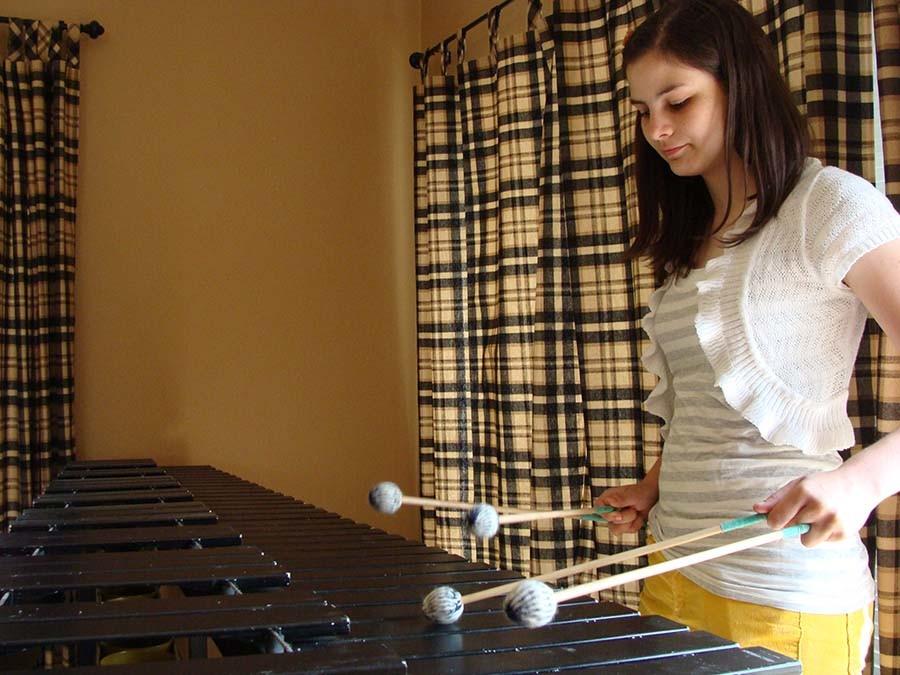 Rochelle Biancardi, senior, began playing the piano in second grade and percussion in sixth grade. Attending Brigham Young University after graduation, she plans to study physics and play in their symphony.

With three older sisters who channeled their passions for music by majoring or teaching music, an older brother who is studying to be a film score composer and parents who are actively involved in music, it was inevitable that Rochelle Biancardi, senior, immersed herself into the art as well.

“My parents have always wanted me to be able to read music, and play it and perform it,” Biancardi said. Biancardi began performing on stage as a pianist in second grade and as a percussionist in sixth grade. Starting young has helped her overcome typical problems of a performer, taking such as stage fright and nervousness. Biancardi is now beginning to teach herself piano after attending over six years of lessons.

In tenth grade Biancardi auditioned to play the piano for Jazz Band and she also auditioned to play percussion for Symphonic Band. She made both. Around that time, Biancardi joined Mock Trial. This resulted in a pretty packed schedule, but she was still able to stay on the Honor Roll for her entire high school career.

“It can be crazy when it comes to performance time,” Biancardi said. “I’m still trying to work on the organizational skills of it all.”

Biancardi continues to do what she’s been doing because she loves it so much. She can’t imagine her life without music; it’s opened up numerous opportunities for her such as participating in competitions and winning awards.

“It’s hard to imagine my life without music,” Biancardi said. Throughout high school, she has won several awards through competitions like Solo and Ensemble and in her junior year, she won fourth place in state on the marimba. As a senior, Biancardi claimed third place on the Marimba and second place on the Timpani.

Although Biancardi loves music, there have been times where she wanted to try something new due to the amount of commitment and practice it requires, but the family tradition has kept her interested and engaged in music as well as reminding her to have fun with it too.

“My siblings and I arrange songs with our instruments to play or sing,” Biancardi said. Some arrangements her siblings have played include film scores from “Star Trek”, Christmas carols and gospel songs. It’s a family-bonding custom, and Biancardi hopes to pass the tradition onto her children.

In the future Biancardi plans to carry her music everywhere, including her university, Brigham Young. She plans to study applied or astronomical physics, and will audition to play percussion for their symphony .Her advice to future musicians is to remember that it’s important not only to practice, but to enjoy the music.

“When you take time to practice, do what your teacher assigns but always remember to play what you want at the end,” Biancardi said.