Rebecca Cruze, Class of 2015, finds a spiritual awakening with a change of surroundings 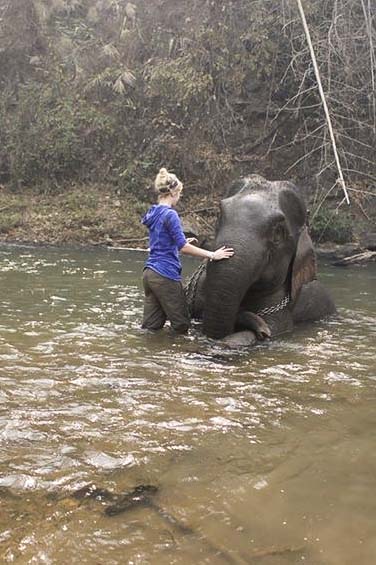 Aiming to interact with people who live in a vastly different environment than West Linn, Rebecca Cruze, Class of 2015, spent three months away from her suburban home to travel throughout Southeast Asia.

Cruze traveled to Thailand, Cambodia and Vietnam and visited over 10 cities. Never did she expect to see the immense amount of beauty that Vietnam is known to have.

“I’ve heard of how beautiful Vietnam was but I never expected it to be this gorgeous,” Cruze said. “The rice fields and tropical jungles definitely lived up to their reputations.”

“I found that it was ‘same same but different,’ which is a Thai phrase I learned,” Cruze said. One of the vastly different experiences Cruze encountered was the practice of Buddhism which she now incorporates into her everyday life. She received training by monks living in Thich Nhat Hanh’s Plum Thai Village.

“I received the three jewels and the five mindfulness training by the monks,” Cruze said. “It was an amazing experience.”

“I helped Zest Floral process flowers and set up wedding arrangements,” Cruze said. “My family also helped me with a majority of the costs because they knew how important this was to me.”

Throughout all of this, Cruze’s mother, Shelly Cruze, has been very supportive.

“She strengthened my aspirations by discussing the details and helping me find a program that fit my description of a profound abroad experience,” Cruze said.

Culture shock has been extremely difficult and strange for Cruze, but her family has been helpful and loving each step of the adventure.

“My mom is now overjoyed to have me back and has been helping me readjust to life back in America,” she said.

In addition to reuniting with her mom, Cruze also came home to her friends, including previous graduates.

“It was really difficult having my close friends leave each year and by junior year I was bored and felt restrained by high school,” Cruze said. She felt that the classes she was taking could have been interesting if she devoted herself, but she felt called to something greater.

“I was tired of football games and going out to lunch every day being my daily rituals,” Cruze said, “I wanted a new perspective and a chance to learn about the methods of traveling and the spirituality present in the East.”

After realizing her need for change, Cruze began to transform her activities by involving herself in Portland events. She also contacted Carpe Diem Education and spoke with some of the leaders of trips abroad.

“The rest just fell into place as my dreams became clearer,” Cruze said.

Throughout the duration of her stay abroad Cruze didn’t have her phone, but was able to check Facebook occasionally when she had internet connection.

“I felt very free and present without having contact. It helped me focus my attention on transforming my perspective instead of being lost in my head thinking about the events going on at home,” Cruze said.

Cruze’s traveling experience was full of trekking through dry forests, beautiful grasslands, lush jungles and villages of monks that blessed her group as well as meditated with them. In addition to spending time in nature, Cruze also spent time in the cities crowded with people and motorbikes. She recalls numerous times when strangers willingly shared their homes and food with her as well as offering her free lessons in Thai.

Scuba diving in the exotic reefs of Vietnam and planting Mangrove trees in the middle of the ocean were some of the numerous activities Cruze participated in. In addition to all the beauty, there was also an immense amount of poverty, disease, violence and death according to Cruze. There were victims and families who lost everything from the mass genocide of the Khmer Rouge, a communist party of Kampuchea in Cambodia.

“I saw diseased women and children, blind and sick people begging for food or money, temples which were destroyed and Buddhas that were decapitated during USA bombing attacks,” Cruze said. “It was both profoundly beautiful and terrifying.”

In Cambodia, Cruze stayed at a street home community, which is a foster like home for families who are poor and need food, shelter or a place for their children. She helped to repaint the local school, taught the children English, played games with them and helped harvest mushrooms they sold for school supplies.

“They were so loving and made us cards and presents with what they could,” Cruze said. “We spent many days rebuilding their community and teaching them about America and learning about their village.”

It was in Thailand, however, where she felt most connected.

“Many of my most cherished memories come from Thailand, where we lived and worked on an organic farm and learned how to be self-reliant, grow or make the resources you need, and how to sustainably recycling and minimize waste,” she said.

Cruze also stayed at a dharma center and became very close to a few monks who still guide her with her meditation practices.

Cruze amassed many vivid memories from her travels.

“I will never forget the sapa women who used a buffalo horn and hot coals to cure my migraine,” Cruze said. “Also it was really cool, the insects looked as though they came from prehistoric times, and all the monkeys would sneak up and steal our food.”

“It  was all a huge mixture of an experience of intense highs and lows and I cannot pick it apart due to it’s interconnected impact on each next step of the journey.”

During her journey Cruze came to countless understandings.

“For most of my new learnings I cannot find the words to explain or the language which would communicate clearly what I have seen and felt on this trip,” Cruze said. “I have learned many things that differ from eastern and western thought, including the dynamics of family and community life, the philosophy of interconnected collective energy, and many differences in healing and health practices.”

Cruze now tries to incorporate the foods, culture, and naturopathic remedies into her western life and she is trying to show her family what she has learned.

“I also learned much about the American government and its impact and crimes against the Asian world,” she said. “As American citizens we have a responsibility to share our wealth globally, and a duty to the world to live more humbly and mindfully with our impact on our planet. We are causing immense damage and need to be aware of our effect locally and worldwide.”

Cruze wants our society to know where are water is from, where our clothes are made and what our government is participating in internationally. She also questions the support for wars in the foreign countries.

“I have had many little insights about war and shopping locally and growing my own food, but I also have had huge transformations of the mind about our spiritual energy as a community, the roots of our anger, and the dependence we have to money and corporations,” Cruze said.

Cruze hopes to travel again and plans to find another opportunity to work with a sangha community, or work on a permaculture farm.

“I hope to learn more about holistic medicine and ancient remedies in Peru in the future,” she said.

Cruze will attend the University of Oregon in the fall to further her studies in environmental science, journalism and holistic medicine.

“This experience has been very reflective and transforming, and a rite a passage into a more mature and well-rounded perspective of our world,” Cruze said. “I encourage you and other young individuals to travel mindfully and join a group that’s doing experiential learning abroad. It has impacted my views and future immensely.

I think the universe helped guide me to the right place for my mindset and aspirations in life, and Southeast Asia was certainly the right area for me to begin my journey.”