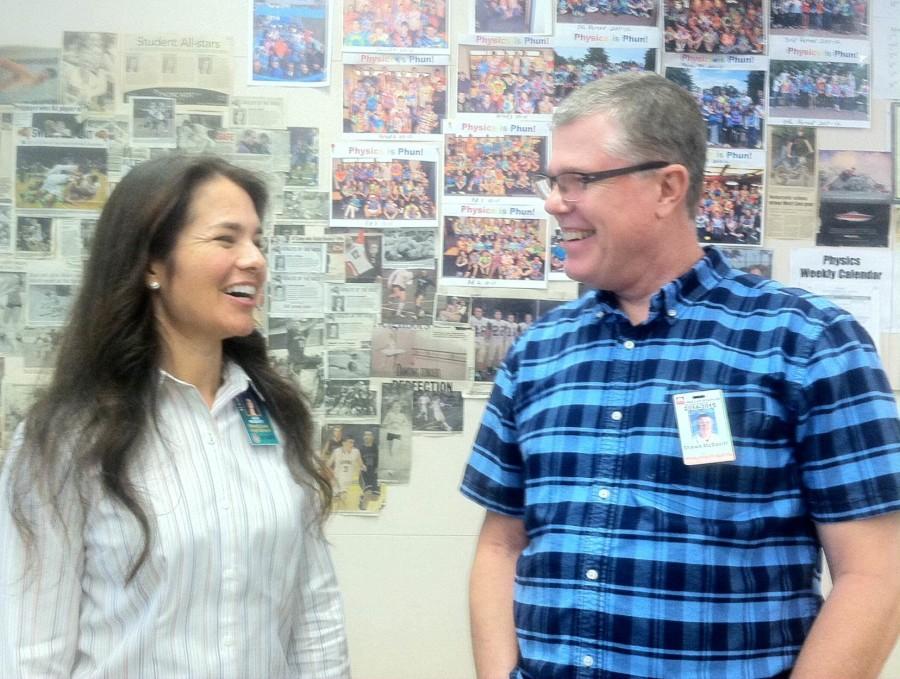 Mr. and Mrs. McDevitt are excited for the new year and for Mrs. McDevitts recovery. After leaving leaving West Linn unexpectedly last year, Mrs. McDevitt is back to teaching for the 2015-2016 school year.

On Oct. 31 of last year Julie McDevitt, science teacher, left school like any other day. She packed up her items, turned the lights off in her classroom and said goodbye to her coworkers for the weekend.

“This is my twentieth year [teaching],” McDevitt said. “Technically my nineteenth.” Out of the 19 years she’s been teaching, 18 of them have been at West Linn as a chemistry and physics teacher alongside her husband, science teacher Shawn McDevitt.

Little did McDevitt know that the month of Oct. would be her last year teaching for the 2014-2015 school year. On Sunday, Nov. 2, 2014, McDevitt was hit while dirt biking by another motorcyclist. The cyclist hit her left side, shattering her bike and throwing her over 30 feet, where she was found unconscious and bleeding. Along with a serious concussion, McDevitt had a broken rib and leg.

“For the months of November and December I slept for 18 to 20 hours a day,” McDevitt said, “and the frustrating part is that for those two months I couldn’t look at any screens.”  When McDevitt first arrived to the hospital, the doctors said that she couldn’t go back to teaching for six weeks.

“In January, I was given permission to start exercising again,” McDevitt said. “I exercised for 2 hours a day, did a little bit of school work and had naps every other day.”

While she was recovering, Mr. McDevitt had to help the substitute teachers with the lesson plans for his wife’s class, in addition to preparing for his own classes.

“My wife had two substitutes, one who felt way in over his head,” Mr. McDevitt said. “The second one was smart but not as approachable.”

As for her students, McDevitt believes the accident was hard on them.

“They signed up thinking that they were going to get her. She really cares about them as people, substitutes usually can’t compete with that,” Mr. McDevitt said.

Now, after a grueling 10 months of recovery, Mrs. McDevitt is back to teaching physics and chemistry next door to her husband.

“It feels really good. I feel cared for. I feel that I’m back with family”, McDevitt said. “I love West Linn, I grew up here, I went to high school here and I’ll teach here until I’m too old to teach anymore.”