Preventing the school from collapsing

Rich Craghead has just completed 10 years of work at WLHS 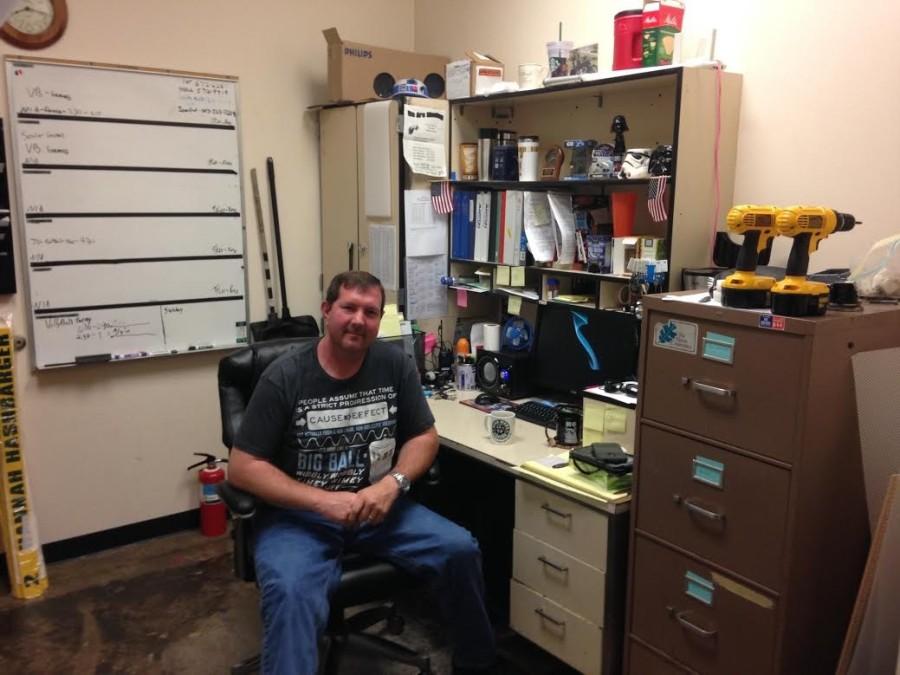 Rich Craghead has been working for the school full-time for ten years as of this fall. His current headquarters is the Custodial Office, home to tools, supplies and equipment.

Sandwiched between the Aux Gym and Student Street lies one of the most critical rooms in West Linn High School: the Custodial Office.

“I just got my official ten years,” Rich Craghead, building engineer said. He has been working as a custodian at the school for 13 years, as a substitute for three and working his way up the ranks as a full-time worker for ten. He plans on doing his job for the next 20 or so years, unless he is able to get a position as a district maintenance, which, according to him, has much more variety. After all, the district consists of 14 schools.

Craghead’s job is mostly to maintain the building. This involves dealing with central heating, air conditioning, plumbing, lighting, cleanups and all sorts of general maintenance tasks. Just during his interview, he was called to help a district maintenance worker with a gym redecoration project, to find the spare key to the scissor lift and lock some of the school’s many back doors.

“There’s always something different going on here,” he said.

Unlike many school employees, Craghead works year-round. Over the summer, Craghead and his colleagues have to complete maintenance jobs that can’t be done while students are at school. Last summer they cleaned the carpeting, stripped and waxed the tiles, cleaned the concrete flooring, cleaned the entire wrestling room, and did miscellaneous “detailed and in-depth cleaning,” he explained.

Craghead gets up at 4:30 AM, arrives at school before 6:30, and leaves at 3:00 PM. Upon his arrival, he opens the building, raises the flags and does general maintenance. When students start to arrive, he cleans the floors and picks up trash before locking the back doors and helping the teachers with their various needs. After lunch, he cleans up spilled food, wipes down the tables if he has enough time, patrols the school for additional tasks. He then begins to prepare the school for sports (including pulling the bleachers out and bringing out the chairs). Does he like his job? “Sure,” Craghead said.

Lately, Craghead has been working on some of the drinking fountains on the second floor. For seemingly no reason, some of the fountains have been pouring hot water instead of cold. The most likely reason for this is that one of the hot/cold valves in the basement has failed. Unfortunately, they aren’t labeled, so he’ll have to go through the 30+ valves one by one.

Even though he has a busy job, Craghead still finds time in the day to read a book a week, go to the gym regularly, ride motorcycles as a hobby and go to the Molalla Gun Club, where he can “safely shoot guns in a controlled environment.”

Craghead is recognized by his colleagues as someone who knows what he’s doing. David Thomas, maintenance mechanic, 59, describes him as a nice guy.

Naturally, there are drawbacks to his occupation. Craghead counts himself lucky that he has a strong stomach, especially considering some of the things that students do. A few months ago, a vandal flooded one of the bathrooms by deliberately clogging and repeatedly overflowing the urinals. Recently, one student vomited in a manner that Craghead described as “like something out of ‘The Exorcist.’”

All in all, though, Craghead does like his job. Not only is there always something different to work on, but, as he put it, “when I go home, I can leave my work here, and I don’t have to take it with me-.it’s pretty low-stress.”