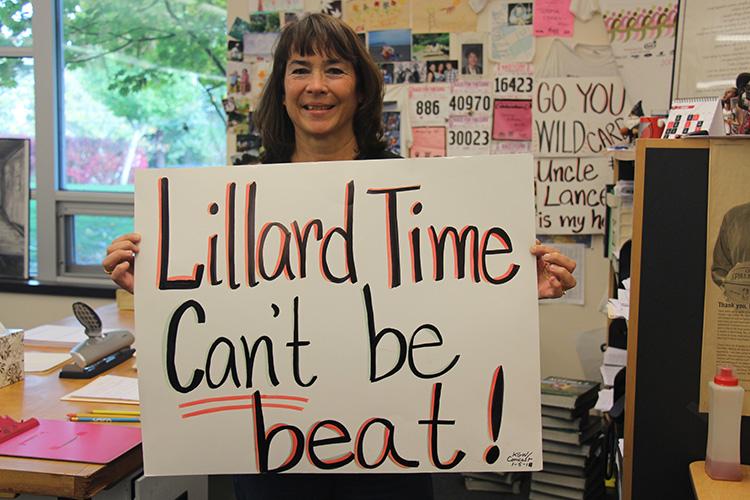 On Feb. 6 1970, the Portland Trailblazers became an official NBA team, but little did they know that they had also gained one devoted fan.

Keely Jacobson, math teacher has been a Trailblazers fan since day one when they became an official NBA team. Her first sign that read “KOBE WHO?” in 2007 was broadcasted on ESPN, Comcast, KGW and multiple commercials supporting the Blazers in upcoming games against the Los Angeles Lakers. Since then, most of Jacobson’s signs have made it in the newspaper or T.V.

“It first started by having a student come up to me and say ‘I saw your sign on T.V!’, and I’ve just kept bringing signs since then,” Jacobson said.

However, in Jacobson’s family it isn’t unusual for being such a passionate fan, her husband’s side of family also strongly support the Blazers. Last year, Jacobson’s grandson brought and held up a sign with “I wanna be like Batum!” written on it. Unsurprisingly, this was also featured in the newspaper, her grandson was presented with a free ticket to a Trailblazer, with the best seat in the house.

“The photographers always remember to come by where I’m sitting,” Jacobson said, “they know I will be there with my grandson.”

In 2007 the Blazers lost three games in a row, pushing Jacobson to make the difficult decision to stop following the Blazers.

“It was extremely disappointing, and I just didn’t didn’t want to follow them anymore,” Jacobson said. This decision was also supported because Jacobson wanted to focus more on her grandchildren, as well as her job. However, the hiatus from supporting the Blazers was short-lived because in 2014, the Trailblazers were sent to finals.

One of the most special moments Jacobson has witnessed live was when Damian Lillard, Trailblazer player, shot the famous buzzer beater and won against the Houston Rockets in the last 0.9 seconds.

“It was such a special moment for me,” Jacobson said. “It was one of those times where I knew I wanted to stay a Trailblazers fan.”

In addition to experiencing some of Trailblazer’s most memorable moments, Jacobson’s also met some of the people behind the scenes as well.

“So far, I’ve met Nicolas Batum because my family was invited to the Batum Foundation Dinner,” Jacobson said.

But if Jacobson could have her way, she would invite the whole team for dinner.

“I’d love to have all of them over for dinner, and cook for them,” Jacobson said. “It would be a dream.”