The annual Yearbooks Northwest camp brought in tears, laughter and the familiar feeling of accomplishment. 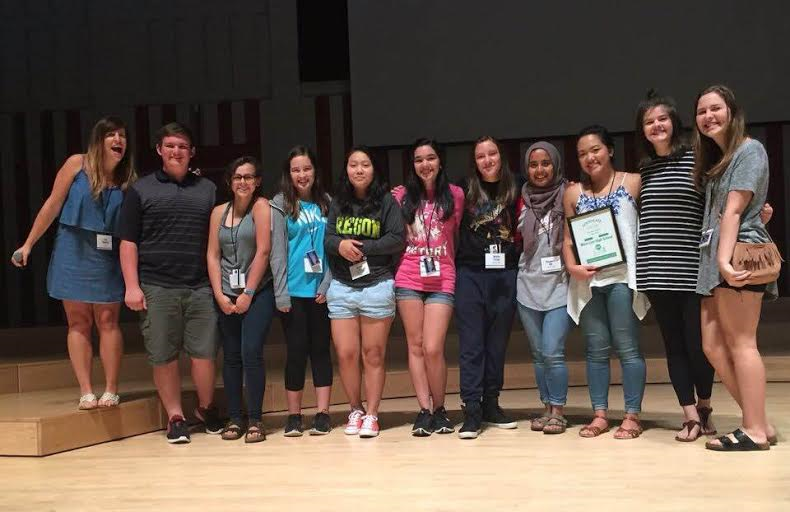 The annual Yearbooks Northwest camp brought in tears, laughter and the familiar feeling of accomplishment.

Coming to camp this year, Isabella Cao, senior and yearbook editor in chief, had a year’s worth of hard work on her back. “We had a big idea last year about the letter writing and we didn’t know if we could pull it off. Being able to say that we accomplished it this year means a lot to me. ” Cao said. “It was amazing to have our hard work and accomplishments recognized”

After the yearbook was released at the end of last school year, the community celebrated the book and the letter writing campaign the staff had put on. The Green & Gold staff made sure every student at our school received a handwritten letter from a friend or peer. For Glenn Krake, yearbook advisor, he got to see first hand how hard the staff worked. “We realized that yearbook has an awesome responsibility but also an awesome potential chance to make a difference” Krake said. “At the end of last years camp after we came up with our theme, they brought our yearbook staff up and through tears gave us the heart award.”

On the last day of camp, the Green & Gold Publication was rewarded with a certificate of excellence. After such a big year, the staff reflected on what the original goals for the letter writing. “We wanted students to stop for a second and think of the people they care most about and spark that discussion and give those people a place to show there” Krake said. “ In the world of social media and quick snapchats we tend to not say things that matter so we wanted to give that platform for those conversations.”

Overall the staff knows how they want this book to be different, “This year we wanted a different theme, something that says ‘hey we made it, now what?’” Cao said.