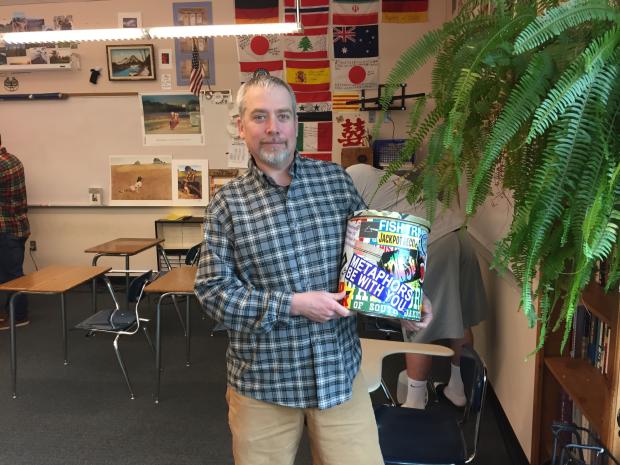 Mr West, English teacher, with the Thought Pot. During the week, students could put their original stories and drawings into the Pot, and Mr. West would read them to the class every other Friday. “The senior class voted on the Teacher of the Year,” Mr. West said. “I won twice. Both times they took a photo of me with the Thought Pot for the yearbook. That was my thing. But that thing is gone.”

“My father created it in around 1973,” Mr. West said. “My mother made it. She took a potato chip tin, cut out pictures from magazines, and glued them on. He did it his entire career.”

When Mr West Senior retired in 1997, Mr. West took the Thought Pot and began to use it in his classes. For the past twenty years, students in Mr. West’s English classes had the opportunity to make a story, joke, or picture under a pen name, put it anonymously into the Pot, and Mr. West would read it to the class every other Friday. At the end of the year, the authors would reveal their pen names to the class.

“It went on hiatus around 2005 because of shenanigans,” West said. “Some boys wrote drug and alcohol references that were coated in secrets. There was a sexual innuendo about my wife. I thought it was dead. I thought it was over. I thought the Thought Pot might be gone. I contemplated taking the Thought Pot out to the woods, digging a shallow grave…A year or two passed and I stopped teaching sophomores and I started teaching AP English again. They were smarter and more creative. It was never as good as it used to be.”

However, Mr. West began to feel that the Thought Pot was a waste of class time, especially given the desires of today’s students and parents.

“This year, three-quarters of what’s in the Thought Pot is not really what I’d characterize as serious writing,” he said. “Just taking up time with an elaborate retelling of a silly one-liner joke…I’m not sure that’s the best use of class time. When I’m doing the Thought Pot for five classes per day, it’s a performance of six hours. And in the middle of this, I look out at my students and see 75% of them staring at their phones.”

To make matters worse, one of the Thought Pot entries criticized Mr. West’s propensity to give open-ended assignments.

“It said, ‘you ask us to think creatively, and I don’t know what the heck you mean,’” Mr West recounted. “It was the straw that broke the camel’s back. The Golden Rule of the Thought Pot is, don’t criticize anybody. That was it. The end. I feel bad for the students who are creative and who used [it] in a creative way.”

“I had [Mr. West] last year,” Julian Comardelle, senior, said. “I submitted a series of stories that were disguised as resurrected Vatican Archives after the zombie apocalypse. I thought some of the other submissions were pretty good. It kind of devolved into random submissions and a very select group of people with continued stories.”

He expressed disagreement with the method of the letter criticizing Mr West. “I think of all the ways Mr West could have gotten the criticism: private and anonymous versus public and anonymous. I think anonymous criticism can be good.”

“I think he should bring it back,” Comardelle said. “I would actually probably support an online Thought Pot. Kind of like a fanfiction site. I think that would be great.”

“It was a good idea, and I feel that it’s a shame that it had to be cut off,” Grace Converse, junior, said. “I think maybe he was just waiting for a chance; if he has complete control over the Thought Pot, he could pick out whatever he doesn’t like. There were a lot of submissions I liked. I liked those surreal West Linn news bulletins. I liked the ones with the drawing of the sheep. It deserved a less ignominious ending. I don’t want to sound like I want to be antagonistic to Mr West. I just feel it’s a shame for such a long-running tradition to be canceled.”

“I’m comfortable with it having ended,” said Mr West. “Despite it being a major part of my teaching career. I can develop to meet the needs of my students. Now, the number one thing students [and parents] care about is grades. Number two is test prep. Number three is being infotained. And creativity is number 47.”