Part of the act 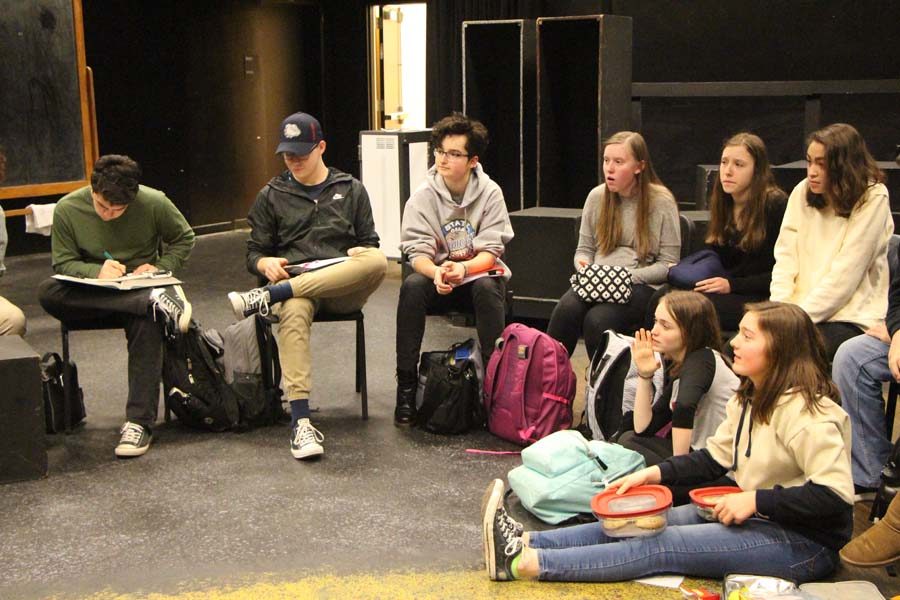 The school’s thespian troupe meeting during lunch while discussing future productions, the state thespian competition and the responses to their regular questionnaires. Both Linda Snyder, senior, and Deanna Plunkett, senior, were able to answer questions regarding future events involving the arts, along with discussing interesting plays or other artistic forms they urge other students to see. “Both Deanna and I run meetings every Thursday and organize all events happening in the department.” Linda Snyder, senior, said.

As the eldest group of thespians finish their senior year, a new round of students have been inducted into the long standing thespian troupe through a round of challenges, events and activities that encompass the fine arts. But if non-inducted thespians are wondering what happened during the secretive process, they’ll have to keep guessing until they are eligible to join.

“I would tell you,” Linda Snyder, senior, and co-president of the thespian troupe, said “but then I’d have to kill you.”

After getting involved in the arts as a sophomore, Snyder has been in numerous musicals and plays during her years in high school, including her role as Maud Dunlop in The Music Man, Mrs. Drudge in The Real Inspector Hound and Morticia in The Addams Family Musical.

Soon enough Snyder had enough points from her involvement in productions, and was able to be inducted in her sophomore year. The requirement she had to meet has stayed the same for this years thespians as well.

“You have to have a certain amount of points which you receive working working or acting in shows,” Snyder said. “You have to have both acting points and tech points to be eligible. And we always give opportunities to receive those points for ones that don’t like to be on stage, and those who prefer acting over doing tech.”

While the actual induction is fairly secretive, Snyder was able to reveal a few aspects if students decide to join the troupe in their freshman, sophomore, junior or even senior year.

“While I can’t tell you everything, I can say it’s so welcoming and you just bond with everyone and really develop relationships,” Snyder said. “You play games throughout the week, and the process is super fun because you’re just laughing and having a good time with people who enjoy the same thing as you do.”

While many students inducted have joined without much thought, others knew it would always be an important goal for their high school career.

“I wanted to become inducted for the people, the experience, and the idea of being a thespian,” Audrey Lipsey, freshman, said. “I love every theater person at West Linn so much, and being a thespian is a way of sharing theater with these people on a regular basis.”

Lipsey was able to join after her work in the Addams Family and Provoked Wife, and plans to continue her work through the thespian troupe in her upcoming years apart of the club.

“I still plan on pursuing the arts in high school,” Lipsey said. “Thespian club was just a way of achieving that with the bonus of wonderful people.”

Other students inducted this year decided based off of their recent interests in the arts that the school has to offer.

“I got inducted because I like doing theater,” Emma Kirby, junior said. “I just enjoy doing it. The shows are tiring because you have to stay out so late, but as soon as the shows are over I want to start again.”

Kirby was also apart of this years inductees for the troupe, and was excited to be able to finally join after her work in theater. While she believes it was an exciting time, she states she wanted to begin her work in the theater department earlier than she has.

“I didn’t start doing anything with the productions until this year,” Kirby said. “I wish I’d started sooner. I’ve done two of the three shows that have happened this year.”

Similar to Kirby, Lipsey won’t be taking any classes regarding the arts next year, but she will still be trying to participate in the productions that follow.

“I can’t take any acting classes,” Lipsey said. “But I look forward to the shows for next year.”

While some see the troupe as a right of passage into the arts, other students simply joined to fulfill their roles in the theater department that they have been aiding in for years.

“I decided to get inducted because I’ve basically been an official part of the thespian troupe since my junior year,” Michael Jonsson, senior, said. “A lot of my friends are members and I wanted to be able to officially join the group.”

Jonnson was able to help in many aspects of preparation for the troupe the year beforehand, as well as organizing the meetings and talking with other members.

“I’m highly involved,” Jonnson said. “I attend weekly meeting with the thespian troupe, participate in the productions as much as I can and I will even be directing Shorts later in May.”

While Jonnson was never an official member of the troupe until this year, his work has made him more than eligible in becoming a vital member of the club. As he continues to pursue the arts, he believes his commitment comes from the unique aspects the troupe provides as well as the classes the school offers for thespians.

“The classes at West Linn are very high quality and informative,” Jonnson said. “Steve Beckingham does an amazing job showing us techniques for theater and acting and Jon Ares is a phenomenal mentor with our tech classes and backstage work.”

Lipsey agrees with the quality of the troupe and classes offered at the school, believing they add to the knowledge and experience she has gained in her first year apart of productions.

“I think West Linn High School’s performing arts program will continue to thrive and impress our community,” Lipsey said. “We all want to improve and grow as artists, and West Linn’s productions are one of the best ways to do so.”

As the troupe may grow and change every year, Snyder made it clear that thespian inductions will always remain a exciting and important opportunity for those pursuing the arts.

“Without this department my high school experiences would have been a dull business,” Snyder said. “This has really shaped me as a person and I’ve fallen in love with this art form. I’d recommend it to anyone and everyone.”