On the other side of the camera

Who transmits the games? 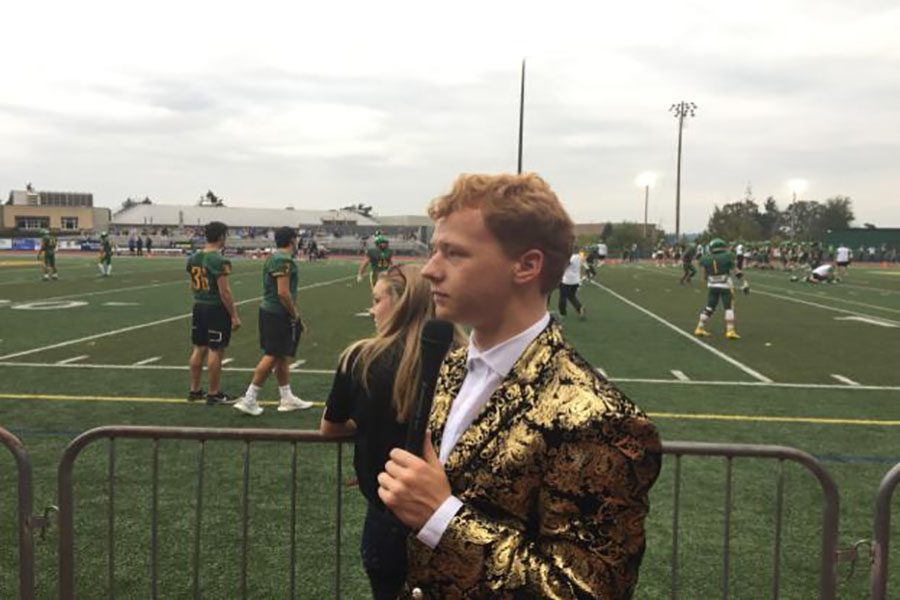 Performing pre-game setup, Andrew Callaghan, senior, tests the microphone. “I am a commentator and halftime reporter,” Callaghan said. “I’m trying to redesign the social media of our school. I’m live-tweeting the game.” Despite his duties, however, his clothing is the main thing for which he is known. “Everybody has their own little identities...Emily is the Team Mom. Dominic is the business guy...I am known as the Rick Astley guy.”

“This is technically my first day,” Aylish Clayton, junior, said. “They kind of just threw me into it. I said I wanted to operate the camera, so they had me up at the football game last month.”

Aylish’s head–first jump is no oddity with WLHSnow Live; nearly all of the broadcaster’s training is on-the-job.

“I wanted to do Yearbook, but my friend Ashley was in Broadcasting, and she told me how awesome it was, and they kind of threw me in,” Clayton said.

“Dominic showed me how to once,” Kaden Carpenter, senior, said).

Fortunately, rather than being seen as a chore, Broadcasting can be quite enjoyable for its participants. “You get to work with a lot of equipment that a lot of schools don’t get,” Carpenter said.

Carpenter enjoys his co-broadcasters’ company as well. “It’s fun to hang out,” Carpenter said. “Broadcasting with the bros.”

“I enjoy it a lot,” Dominic Regali, senior, said. “It’s a hobby of mine. Most of my friends do it. It’s really more of a hangout.”

However, the job is not without its disadvantages.

“I’m the camera guy,” Carpenter said. “I film the game. I film everything. It’s probably the most labor-intensive job.” What most frustrates him is the various camera-related mishaps. “Happens every time. Drives me nuts.” During a soccer game, he had been made producer. His inexperience with the camera, however, made him unable to set up in time, causing them to miss the entire broadcast.

And there are “the late nights,” Callaghan said. “Generally, a game is done around 9:30 p.m and then we have to pack up and we are generally out of the school by 10 p.m.” Since games typically are on two out of every five school nights, this can make things difficult.

There is also the issue of filming from the stadium roof. “I’m terrified when I’m up top due to the two-to-five-thousand-dollar cost [of the camera],” Carpenter said. To make matters worse, Clayton is afraid of heights.

“I met them earlier. They were all very excited,” Jason Swygard, play-by-play announcer for the 1080 The Fan radio station. “I’ve been in the radio business for 16 years…I think it’s just really cool that they have that program here.”

“Join,” Carpenter said. “That is to the readers.”

Students who want to join can come to a lunch meeting that is held on the first day of every week in the F-Lab, or simply show up to a broadcasted game and talk to the students filming the players.