No place in our schools 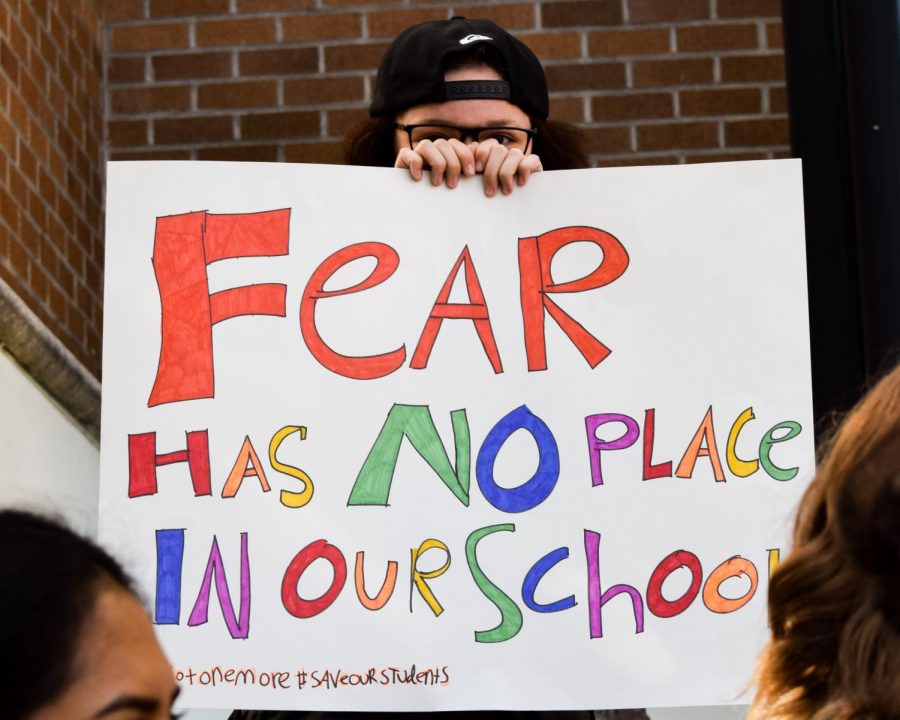 Photo from the nationwide walkout which took place on April 20, 2018, the 19th anniversary of the Columbine massacre.

*** real name is not used in this article to protect the privacy of the child.

Last week at my little sister’s elementary school a student brought a toy gun to class and pointed it at and shot bullet darts at classmates.

This was right after recess and only a number of students had returned to their classroom. A few students paid little attention to this; one student was terrified. He was emotionally distraught, crying on the floor.

“I went to see if they were okay. Nolan is the type of kid that very seldom cries or gets upset about things. He hardly ever shows he is upset. He bounces back really fast when he gets hurt, and hardly ever cries for anything, so it’s rare when he cries and gets upset about something. He thought that he was being shot at,” said a witness of the aftermath.

This is a fear that I did not have when I was in elementary school. I can still remember a time before this was our reality. A time when there wasn’t a total of 346 mass shootings a year, as there were last year in 2017 according to the Gun Violence Archive. And a time when there wasn’t an average of more than 1 school shooting a week, as there were in the 2017-18 school year according to CNN, as of May 25, 2018.

According to the Gun Violence Archive, so far in 2018 there have been nearly as many mass shootings as there have been days. Politicians in office are failing Americans by not taking action and passing common sense gun laws, and by denying that guns are the issue.

Politicians in office are failing students by having their only solutions revolving school shootings be defective ones. Solutions which only prevent as many students die, like lockdown drills, instead of having their solutions be ones that stop school shootings all together. There is no reason a student should have to fear when they go to school that they could be the victim of a shooting.

People forget how new lockdown drills still are to Oregon. I can still remember a time before lockdown drills. Elementary school students today do not.

It was not till the summer break before my second year of middle school that Oregon Legislature took action to protect students with a new law that required every public school annually to hold two safety threat drills that would train students in procedures – lockdown drills. This was the summer break after the Sandy Hook school shooting where 26 students and teachers lost their lives. Now, after the Parkland school shooting, where 17 people lost their lives, there is a push for more school lockdown drills.

To all students who started school in the 2013-14 school year and after, school lockdown drills have been as engraved a part of their childhood as school fire drills were a part of mine.

Guns have no place in our schools.

Fear has no place in our schools.