How West Linn is helping young women around the world 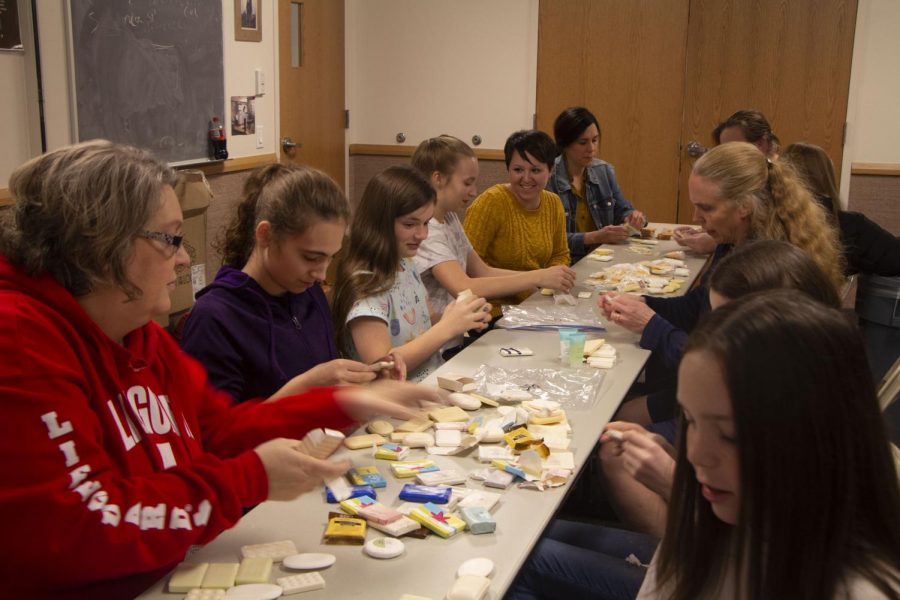 The Church of Latter-day Saints' beehive group and advisors remove plastic wrapping from bars of soap to be sent to young women in foreign countries.

In West Linn, it’s easy to live in a bubble. In a small town filled with wealth and privilege, it seems simpler to just to forget about the outside world. However, the young women at The Church of Jesus Christ of Latter-day Saints assisted the Portland Chapter in trying to pop that bubble. On Wednesday, Nov. 7 the beehive group (girls 12-14) of the Latter-day Saints church participated in preparing products to be shipped to young women in developing countries.

Co-director of the Portland Chapter, Jessica Lancaster came in to talk to the young women about the importance of the Days For Girls, a global organization which provides young girls and women with menstrual care and education. “This is a really special organization because it has potential to change the world by allowing girls to be educated you are taking them out of this poverty cycle that they are otherwise destined to be in,” Lancaster said.

Together, the young women unwrapped bars of soap and folded cloth towels and underwear to aide the Portland Chapter by sending these items to young girls in foreign countries who have limited access to feminine products. The process is tedious, as they remove the tags from towels and the plastic wrapping from the soap. Lancaster explains that the country the towel was made in is displayed on the tags so they need to remove them to prevent young girls not using them because of a conflict with that country, and the plastic can’t always be disposed of in the places they send the products. One of the beehive advisors Cheri Kay Doty worked alongside the girls.

“I think it’s really cool that they’re helping other girls their age around the world. So I think it’s our responsibility to help our peers throughout the world because we have so much privilege here in America, and that’s what we kind of try to do in the church anyway is serve each other. It’s cool to serve girls.” Doty said.