A birthday to remember 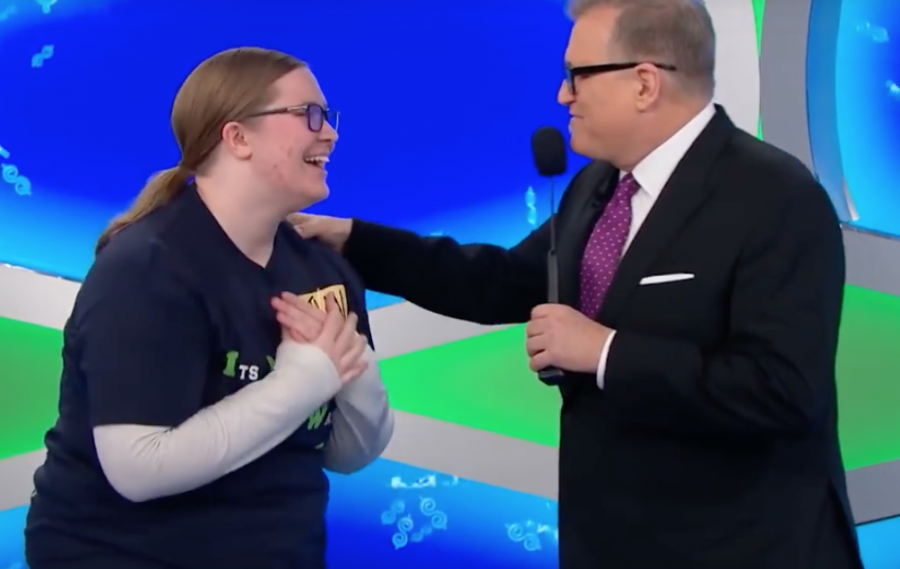 What started as a half-joking suggestion turned into a whirlwind experience when Caitlin McCabe, senior, learned that she was going to be a contestant on The Price is Right.

“I was never even imagining getting on the show,” McCade said. “There were people who’ve been there like 450 times, so for me, a first-timer, to get on was crazy.”

McCabe recently flew down to California to go to a taping of The Price is Right for her 18th birthday. Originally, she was just going to be an audience member, but McCabe says that she was able to talk her way into being a contestant.

“In my interview, I kept saying that I was there for my 18th birthday, which the producers liked because they’re always looking for people who are celebrating,” McCabe said. “And they asked me more questions, and it just became a nice conversation.”

When Caitlin got called up to Bidders Row (the place where the contestants stand), she was told she would be playing the “Grocery Game”, where she needed to use five grocery items to add up to a total cost between 20 and 22 dollars. In order to do this, McCabe said she was able to draw from some of her high school work.

“I had a little bit of AP Stats help,” McCabe said. “I looked up this website that had the average price of things, which was what I was thinking about while I was playing.”

While McCabe was focusing on selecting the right amount of items, she found that the crowd had a few opinions of their own. Sometimes, she said, they were helpful, and other times, they were not.

“Part of the game was listening to the audience because there would be a consensus across everyone,” McCabe said. “But then everyone’s yelling and shouting, and it can be a lot more anxiety-inducing than people realize.”

Ultimately, McCabe was able to create a total of $20.26, meaning she won her own car. But it wasn’t winning the car that made the experience memorable for McCabe. Just being there was more than enough for her.

“I got more than I could have ever wanted out this experience,” McCabe said. “I just thought it was the most perfect thing to have happened.”

To see McCabe play on The Price is Right, watch the video below: