Q & A (positive) about blood drives 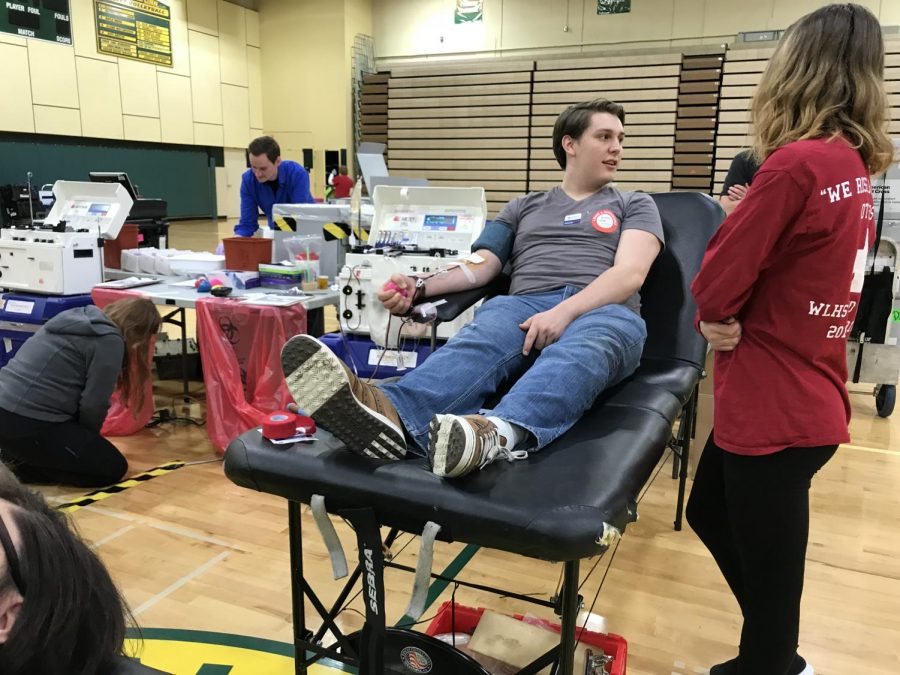 Nick Olson donates blood during a Red Cross drive in 2018.

Every year around February, the WLHS Red Cross Club hosts an all-day blood drive in the school gym. However, this drive isn’t the average event that takes up the gym for the day and is packed up by the next day; it’s an event with a purpose. Red Cross Club member Jill Schroeder, sophomore, says that the drive has an impact that extends beyond WLHS.

“They told us that every two seconds someone needs blood in the U.S,” Schroeder said, “So there’s obviously this need for blood.”

Even though there’s a need for blood and blood donors, there is a growing issue of lack of donors in the U.S. As of a 2018 study, less than 38 percent of Americans are eligible to donate blood, and for those who can donate, Schroeder says that it can be hard to get them on board.

“Last time we were really struggling to get enough donors to even do the blood drive,” Schroeder said. “Since a lot of people choose not to donate even though they’re eligible.”

So why aren’t people donating blood? Some of the top reasons people give include being afraid of needles, not having enough time, or being afraid of contracting an illness from the process. However, one of the leading reasons that people are not donating is the fact that they are unfamiliar with the process. To shed some light on the subject of blood donation, here are some of the most frequently asked questions about blood drives:

Q: How does the donation process work?

A: The process of donating blood is fairly straightforward, according to the Red Cross website. After registration and a quick physical, the donor sits while a sterile needle is inserted for the blood draw. The donor then sits for about eight to ten minutes while the blood is drawn, and after around a pint is collected, the needle is removed. The donor then sits and adjusts to decrease in blood while enjoying refreshments. After ten minutes, the donor is free to go.

Many students tend to use excuse that they don’t have the time to donate blood, but after taking a closer look at the process, the donation doesn’t take that long.

“The actual donation process is fairly simple,” Schroeder said. “It only takes about 30 minutes, but people tend to think it takes a lot longer.”

Q: What are the side effects or risks?

Temporary lightheadedness is the extent of side effects that most donors experience, but some people do experience more concerning side effects If donors are still lightheaded after eating or drinking, feeling numbness or tingling, or bruising in the needle site, contact the donation center for further. Feeling these effects are not common, but it’s important to be aware of the possibility of these symptoms going into the donation.

As for the risks that come with donating blood, there are very few for most donors. For those who don’t have any preexisting conditions, donating blood does not bring about any risks. However, if a donor is iron deficient or has any blood-borne diseases, donating blood may not be the way to go.

Q: Who does it help?

A: Donating blood helps thousands of people across the nation. A recent Red Cross study showed that one donation can potentially save up to three lives. Schroeder says that one donation of blood can help anyone who needs it.

“A donation helps literally anyone,” Schroeder said. “There’s only four different blood types, so your donation will definitely go towards helping someone.”

The need for blood in the U.S. is strong, but statistics show that the amount of donors is something that needs to be fixed. The bottom line for Schroeder is that more donors means more of a solution.

“If you can donate, I would definitely recommend it,” Schroeder said. “Anyone can donate, because like, blood is blood.”