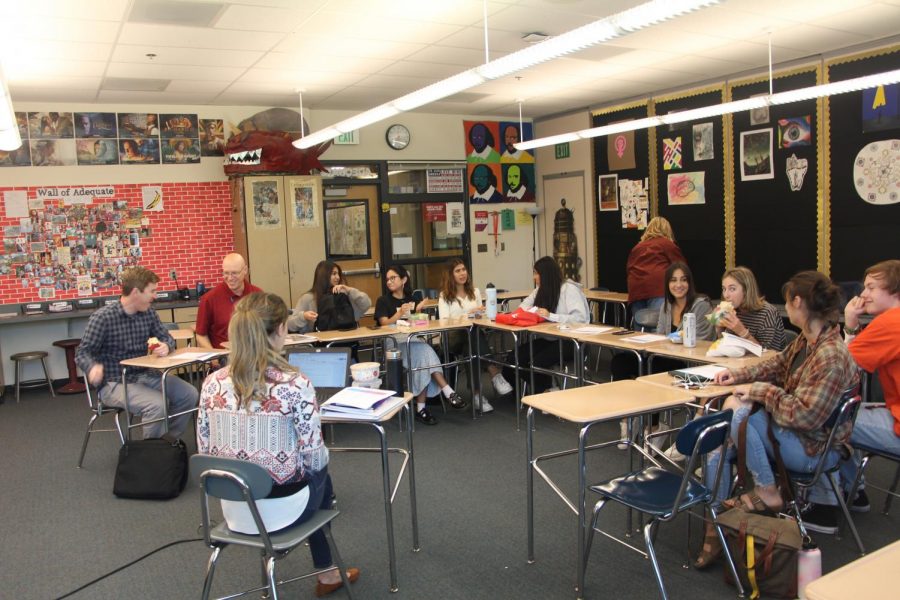 Students lead the first United Club meeting of the school year on Sept. 18.

After a slew of racially-targeted incidents on campus in 2014, United Club was formed by teachers Jackie Hamm, Dan Julian, and Alex Close. Its purpose: to be a platform for students to express their thoughts and opinions on ways to make their school and community a better place.

Something that makes United Club unique compared to other clubs is that it is very student-driven. “Each year it kind of evolves depending on who the student leaders are, and the fact that it provides a space for students to push for support for things that they think are important,” Close said. “I think that it gets more attention from district-level officials than it would if it was teachers pushing for things. Student voice is really powerful, and having an organized group of students that work on certain things I think gets a lot of peoples’ attention and people listen to students.”

Julian added, “And it also helps with the whole student-driven aspect, because otherwise it would be us kind of determining an agenda and a focus for the club, and that wouldn’t feel very authentic.”

Within United Club, there is a board of students who exist to lead the club. The board is made up of a diverse group of individuals, all who have various plans for why and how they want to improve upon the school.

“I think the purpose of having the board is just to be intentional with all the kids that are coming in during the meetings, and making sure that it isn’t just chaos and we just talk about whatever,” Ashley Yablonsky, senior, said. “That there is actually structure. We have goals and we have a plan for what we want to do.”

One of the most important elements of the club is that it opens the school up to new conversations and ideas. “I think it’s also important because it gets a little bit of a conversation started throughout the school, that probably wouldn’t if this club wasn’t a thing,” Manisha Nallakatla, senior, said.

With the constant evolving of the climate surrounding politics, race, gender, and other topical issues, having a club like United in the school is quintessential in facing these issues head-on and making the community a better, safer place for everybody.

“I think sometimes in the past there was an impression that people couldn’t be part of the club if they identified in a certain way,” Hamm said. “But we want to emphasize to your readers that every single person is welcome, even if you want to just come and listen for a while or be a fly on the wall for a while we would love that. We totally welcome that.”

If you are interested in joining United Club, they meet on Mondays in A104 at lunch.