Queer terms need to be understood by the general public 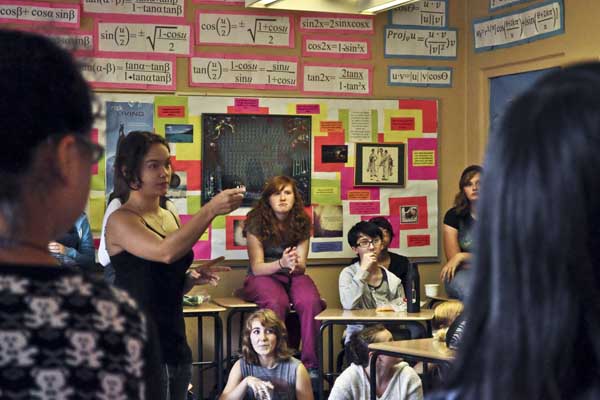 With National Coming Out Day celebrated last Friday, it is important to understand what people can come out as. Most people know the basic terms: Lesbian, Gay, Bisexual and Transgender. But there is a real acronym that contains terms that need to be understood by everyone if they wish to be for (or against even) human rights. That acronym is LGBTQQIAAP.

The West Linn community is just as diverse as any other and it is important than everybody understands each other. It’s proven that if one knows a queer person, they are generally more accepting of the overall queer community.

Lesbian: A woman who is sexually and/or romantically attracted to other women.

Gay: A man who is sexually and/or romantically attracted to other men.

Bisexual: A person who is sexually/romantically attracted to people, regardless of gender. Are attracted to men and women, and possibly genderqueer/genderfluid individuals depending on the bisexual’s preferences.

Transgender: A person who identifies as a different gender than the sex of the body they were born in. They can choose to transition into the gender they identify as using hormones and/or having surgery if they so choose.

Queer: A person that chooses not to identify as a certain label, so instead they are queer.

Questioning: Someone who is not sure of his or her sexuality and/or gender identity. They could go anywhere on the spectrum when they’ve decided what they identify (or don’t identify) as.

Intersex: A person that has reproductive organs normally associated with both male and female sexes. Can identify as male, female or genderqueer/genderqueerfluid.

Asexual: A person doesn’t experience sexual attraction. They can still have sexual urges, but does not want to be intimate with anyone. They can, however, be romantically attracted to people.

Ally: A person that does not identify as queer (i.e. a cisgendered straight individual) that supports the LGBTQQIAAP community.

Pansexual: Someone who is attracted to every type of gender identification.

Along with those terms, it is also crucial to understand the following:

Sexual Attraction: A natural desire to have sex with a specific person, it can be an immediate desire upon seeing them or a more gradual one that develops over time. In the end the base desire is for sex with that person.

Romantic Attraction: A feeling that causes people to desire a romantic relationship with another person. Romantic actions can be anything the individual considers romantic, however they are usually not sexual in nature.

Genderqueer: A person who feels that his/her gender identity does not fit into the socially constructed “norms” associated with his/her biological sex.

Genderfluid: Gender Fluid is a gender identity best described as a dynamic mix of boy and girl. A person who is Gender Fluid may always feel like a mix of the two traditional genders, but may feel more boy some days, and more girl other days.

Cisgendered: The opposite of transgendered, someone who is cisgendered is a gender that agrees with his or her societally recognized sex.

Demisexual: The state of being sexually or romantically attracted only to people with whom one has a strong emotional bond.

There are many queer terms and there probably will be more in the future. It’s important that people understand these terms because comprehension is the first step to acceptance.