Tricky question of the week: What would you do with invisibility? 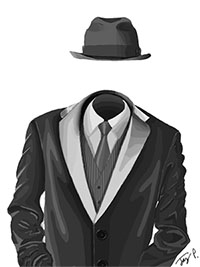 Happy Monday! I’m Evan McKinley, and it’s time for this week’s Q.U.E.S.T.I.O.N! Send your answer to [email protected], and if it’s a good one, I’ll print it next week! Now, here’s the question, stolen from The Complete Book of Questions: If you were invisible for a day, what would you do?

I’ll just say right here that I wouldn’t steal anything. Sure, I could pick pockets, or rob a bank, or something like that, but that doesn’t mean that I should. It’s actually a bit alarming when people say that they would; are there actually that many people who would start robbing innocent people the second they realized they couldn’t get caught?

Now, one thing I might be tempted to do is to sneak into places where I’m technically not supposed to be, such as backstage during the performance of some big Portland5 musical. It would be neat to see the performers preparing, calming themselves down, forgetting their lines at the last second, and running all of the technical stuff.

It would also be neat to visit the office of someone really influential or successful, like a billionaire or a politician, and just watch them go about their business. If I got caught, however, that plan could go very wrong very quickly. Imagine how the Secret Service would react if some random kid materialized in the Oval Office.

…Come to think of it, there aren’t very many uses for temporary invisibility that are entirely ethical and legal.
Okay, how about this: I could expose fake mediums and psychics. (Honest mediums I’d leave alone.) I’d hide in their office, and right when they were fooling a mark, I would freak the heck out of the scammer by pretending to be a real ghost. After the mark left, I would pretend to be the real spirit of one of the ghosts they impersonated, and say that the souls of the netherworld didn’t appreciate the medium stealing their identities. With any luck, this would terrify them into going straight. Since many of the fake mediums primarily take advantage of grief-stricken people, I don’t think this would be ethically compromising. Let me know here if I’ve missed some big moral problem.

Well, that’s my answer. What’s yours?