WLHS had its 97th birthday on September 22nd 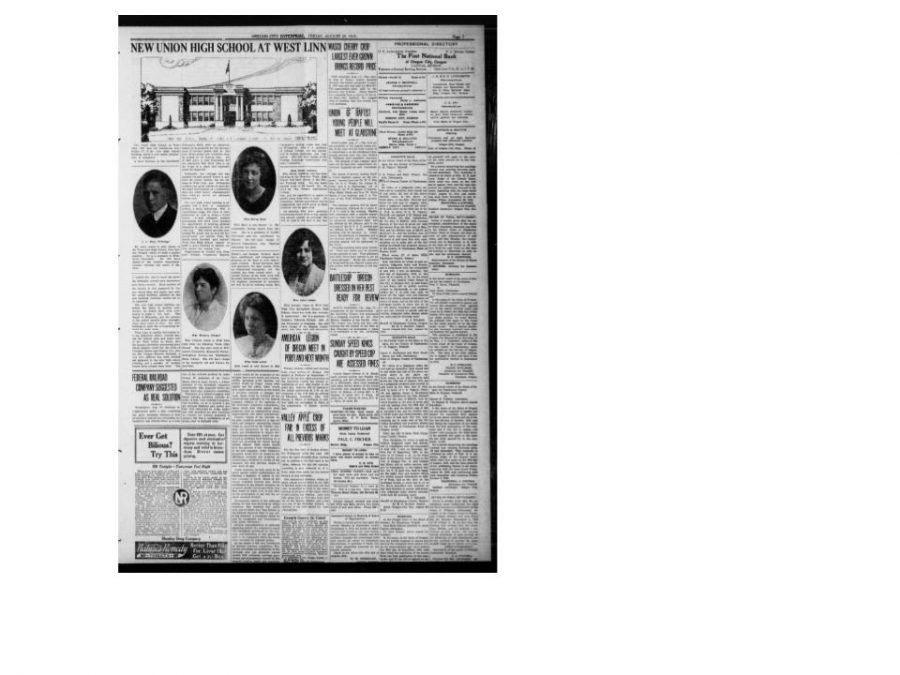 In 1919, Union High School opened. It had the Union title because it was the only high school in the Portland Metro Area outside of Portland proper, and thus unified the high schoolers of West Linn and Wilsonville. The last remaining object known to be part of the original building is a white window stored in the Hall of Fame display case, with original letters from decades-old jerseys. Curated by Sue Bradley, it is available for viewing on the way to the cafeteria, just to the left of the doors to the Main Gym.

By the twentieth century, 9th and 10th graders went to the 1-10-grade school in Willamette, and then Oregon City High School for 11th and 12th grade.

Happy Birthday, West Linn High, and may you have many more!

For the academically inclined, here’s an excerpt from the above newspaper article:

The Union High School, at West Linn, will open for instruction September 22; if the new high school building, which is now under construction, is completed.

A large increase in the enrollment is looked for; and to meet the growing demands, several new instructors hav been secured. Each member of the faculty is well prepared for the line which they will teach; and with the added facilities afforded by the new building, excellent results are to be expected.

The new high school building embodies the latest in modern architecture, no details have been overlooked to make it the best. The Board of Education, and the patrons of the school showed great foresight, when they voted to erect the new building to meet the ever-growing demand for more room.

West Linn is rapidly developing into an industrial center; already having the largest pulp and paper mill in the West within its limits, also the largest electricity generating plant which supplies power for the cities of Portland, Salem and Oregon City, also for the Oregon – Electric Railroad, a new city addition has been blocked out adjacent to the new high school building, and  number of modern homes have already been built. The Willamette Falls offer an unlimited source of waterpower for the development of electric power, and in the near future many new industries may be looked for to develop here. All of this gives a solid foundation for the statement that West Linn is on the verge of a rapid, and unprecedented development.

Ordinarily, the average city has reached its full growth before it perfects its school system, but the citizens of West Linn and Willamette realized that good schools do more for the rapid development of a community than any other factor, conseqquently [sic] they voted to secure an adequate system now.

The new high school building is arranged with a view to community service, a large auditorium with a commodious stage will allow of civic gatherings as well as being a social center. A well equipped, modern gymnasium will allow every student the opportunity of securing physical education in compliance with the new state law. The school grounds comprising six acres, will be laid off into playgrounds and athletic fields, for tennis, track, baseball and football. West Linn High School expects to make a good showing in athletic circles during the coming year.