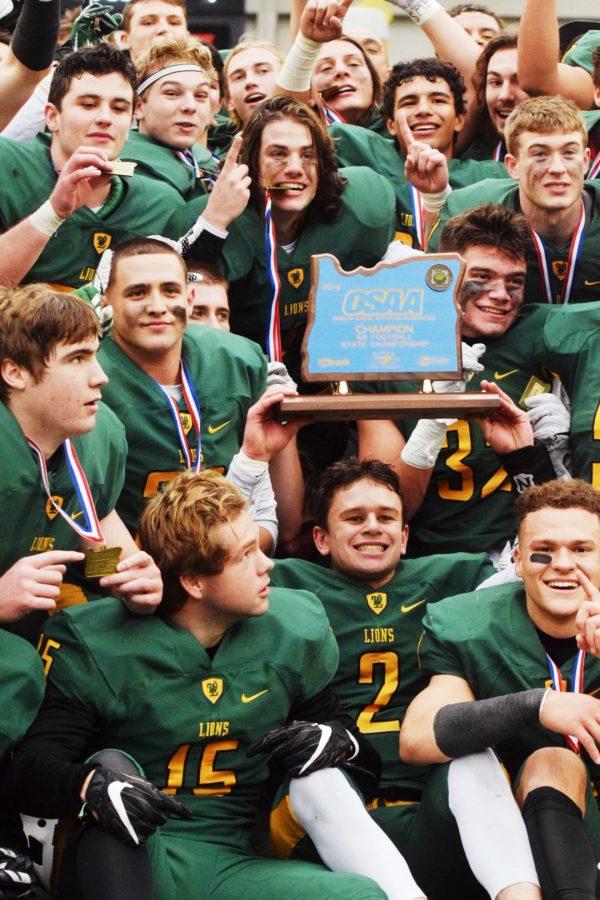 Legacies are often created in moments that are relished within the minds of fans, coaches, and players alike. West Linn’s 2016 football team captured their legacy Saturday at Providence Park, when they earned their program’s first State Championship. In a rematch of the 2014 quarterfinals, West Linn gave Central Catholic a historic beatdown (62-7), as the Lions pounced on this year’s Rams. Led by Coach Chris Miller and his veteran-led roster, the final buzzer sounded and the sidelines roared with excitement. Coach Miller gave credit to his players and coaching staff, in a postgame interview with reporter Lane Jensen.

“My guys were very focused and they were ready. There were 35 seniors on that field and I am very proud of them. Our defense had a goal, set at Team Camp this summer, to hold every team we played to under 21 points,” Miller said. “In our first game of the year, Oregon City put up 27. From that point forward our defense has played phenomenally.  Our defensive coordinator, Coach Darren McCarty did an excellent job. Our entire staff deserves props for their hard work.”

Last year’s loss against Jesuit in the State Championship game acted as motivation for the West Linn Lions. They played with a sense of inspiration that was necessary in order to defeat Central Catholic, a team who edged their way past Jesuit in this year’s quarterfinals, and then Tigard in the semis.

“Our kids played with incredible passion, and they challenged each other all week” Miller said. “This is my first championship, and it’s an incredible accomplishment.”

Going out on with championship ring is the dream ending to any football player’s four year high school career. While fans focus on star players who make big plays on a consistent basis, 35 seniors made up West Linn’s talent-filled roster this season. Each individual player deserves to be given recognition.

“The great thing about these seniors is that they’re both terrific football players, and also incredible young men. I couldn’t be more proud of those guys. Quality class people. They came out here with a purpose and put something pretty impressive up on that board,” Miller said. “A tremendous day of weather really complimented how we played. With such experienced players we knew what to expect. We’ve played four games here in two years. We are very blessed to have this day.”

The Lions are bringing home a state title to West Linn, to their school, players, and student body; there’s almost 26,000 people in the city who will have a this memory for a lifetime. They will remember winning a state title for the first time, coming together, and the moment when they rose to the top.

Many of West Linn’s players are leaving a legacy and are now looking forward to collegiate competition. Elijah Molden, star rusher and defensive back is heading to The University of Washington; however for right now, Molden is relishing in this moment and the feeling of winning it all.

“Bringing back a championship is huge, and it means the world to everyone in our program,” Molden said. “Stopping Central Catholic by that margin (55), is a testament to all of the practices over the years. It’s surreal.”

Throughout the 2016 football season, Oregon high school football record books have been rewritten. Another record was overcome when Dawson Jolley, Lions running back, rushed for a 23 yard touchdown. The final score of 62 points is the most scored by a team in an Oregon Championship Game. Merrill High School held the old record (60), achieved in 1958.

Individual records have been broken as well. Tim Tawa, quarterback for West Linn, has placed himself in conversation for the honor of best Oregon High School quarterback in the history of the state. He’s impressive on and off the field. Tawa leads the state in career passing yards (11,337), and passing touchdowns (143 completions for 714 scores), not to mention coming close to a state record of season passing touchdowns (55), one short of Beaverton’s Taylor Barton (56) in 1997.  During this weekend’s championship game, Tawa ran a touchdown in for a score and could have ended up breaking that record as well. Even with his amazing football talent, Tawa is set to play Baseball at Stanford University after he graduates. He is not only is an incredible football player, but also an accomplished academic maintaining a 4.25 GPA. Tawa’s dream of bringing a state championship home is something he’s worked towards since grade school.

“Words can’t describe how I’m feeling right now, it’s special. I feel really thankful that I’ve gotten to play with such great guys while bringing West Linn it’s first State Championship ever,” Tawa said the team worked their plan. “We had a great scout team at practice this week. Our team came out fast, we wanted to come out fast, and our defense stepped up. I’m very proud of my teammates and how they fought, our defense did an excellent job and showed how tough they are.”

Looking forward to next year, West Linn’s junior quarterback Ethan Long will step into Tawa’s place. Holes from graduating seniors will be filled by rising athletes, who have had plenty of in-game experience, thanks to large margins of victory this year. Players such as junior linebacker Zack Huffstutter are to be relied on defensively, and offensively and Tyler Good, a junior running back, is expected to continue to carry the ball. Qawi Ntasasa is another offensive threat as a receiver that will take this year’s experience and build on it.  For now, West Linn High School and their community can marinate in the joy of a State Championship. And as this pack of Lions know best, next year’s season began once the final whistle blew Saturday at Providence Park.