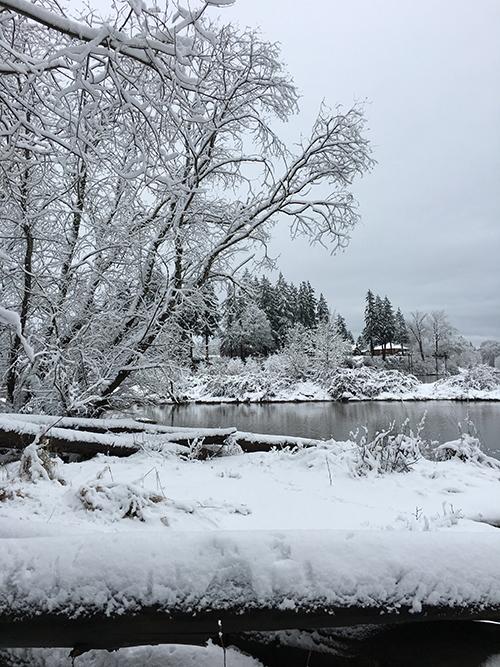 An overwhelming amount of snow piles up around West Linn.

Predictions of light snow were thrown out the window when inches of ice and snow lined the streets Dec. 14. Cars and buses were stuck, and those lucky enough to be driving experienced a commute time that was hours longer than usual. With four snowstorms this winter, students are starting to lose interest in the inhibiting snow.

“It’s kind of inconvenient,” Sheridan Hardy, junior, said. “When we have school days we usually have to stay trapped inside and it delays our test and activities.”

I had a band concert scheduled for the Wednesday before break and a math test scheduled for the week after break. The first was canceled and the latter had to be pushed back another week. Fortunately, my math test was not scheduled for the first day back, unlike some other students. There is no direct way to contact students and make sure they all get the same message, so many students like Hardy were left wondering for two weeks whether or not they would come back to school with a surprise test waiting for them.

“I don’t mind a little break every once in awhile, but it becomes a hassle,” Hardy said.

Because of the underwhelming amount of snow during the first storm, people were caught unprepared when an actual storm hit during the second wave leaving families trying to get home from work and school stranded on freeways and backroads. The third supposed storm only caused a two hour delay, but the fourth and most recent storm has tacked on two more snow days with a possible third.

“I don’t want stuff to get super delayed,” Hardy said. “I’d be irritated with another snow day.”

Students schedule weekends to go shopping and hang out with their friends since they don’t have extra time during the week. With roads being dangerous, students are not getting the opportunity to get out of the house and take their much needed break. Instead, they are trapped inside doing nonstop homework and worrying about whether or not they will have tests and quizzes coming out of nowhere.

I love the snow. I could spend a whole day just staring outside and watching the numerous flakes fall. However, when I can’t get out of the house to run simple errands or meet up with my friends, I start to grow weary of being surrounded by walls for days on end. Although this winter has been wonderfully white, the snow needs to take a break and give students a chance to fall back into their normal school routine.