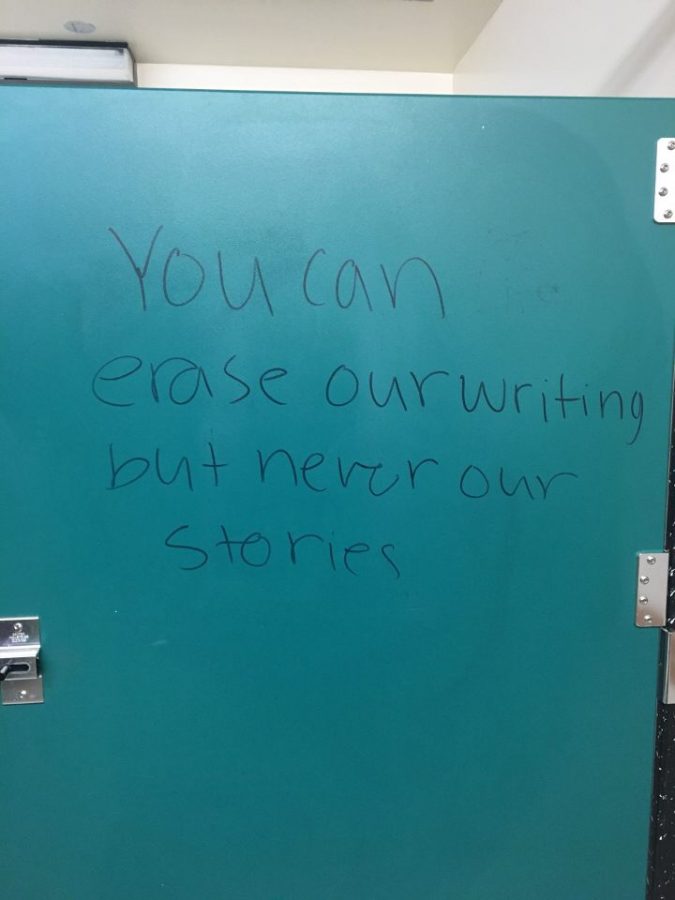 Graffiti found in girls bathroom lead to a conversation about sexual harassment and school policy for addressing it.

A series of messages written in marker on the walls in the girls bathroom have expressed a sense of frustration at what some perceive as a systemic problem with sexual harassment. The graffiti, which began appearing a week ago, has given a voice to some students who feel the administration has not taken adequate actions to address student concerns.

At a meeting of the West Linn Feminists club, provoked by the writing, Principal Gregory Neuman, other counsellors and school staff members answered questions about the school and police process regarding harassment.

The meeting was emotional, with some students directly questioning whether administration had followed proper procedure after assaults were reported, accusations which administration refuted. Some students were moved to tears by the discussions.

While staff and students hope to continue these discussions, both sides have stressed they would prefer the conversation to be held publicly, as opposed to through graffiti. The feminist club has since held two all-student meetings to discuss possible routes and changes they would like to see made.

“The entire West Linn High School staff cares deeply about creating a school culture that is safe and welcoming for all students. We work constantly to foster a learning community that is safe, welcoming, inclusive and comfortable for our students. We strongly encourage all students to go to their counselor or an administrator any time help or support is needed. I greatly appreciate how active our student body is in vocalizing their beliefs and for their continued help in improving the special community that is West Linn High School.”

Feminist club plans to continue discussions at their regularly scheduled meeting in A104 Fridays at lunch.

Stay tuned to wlhsNOW.com for continuing coverage of this story.