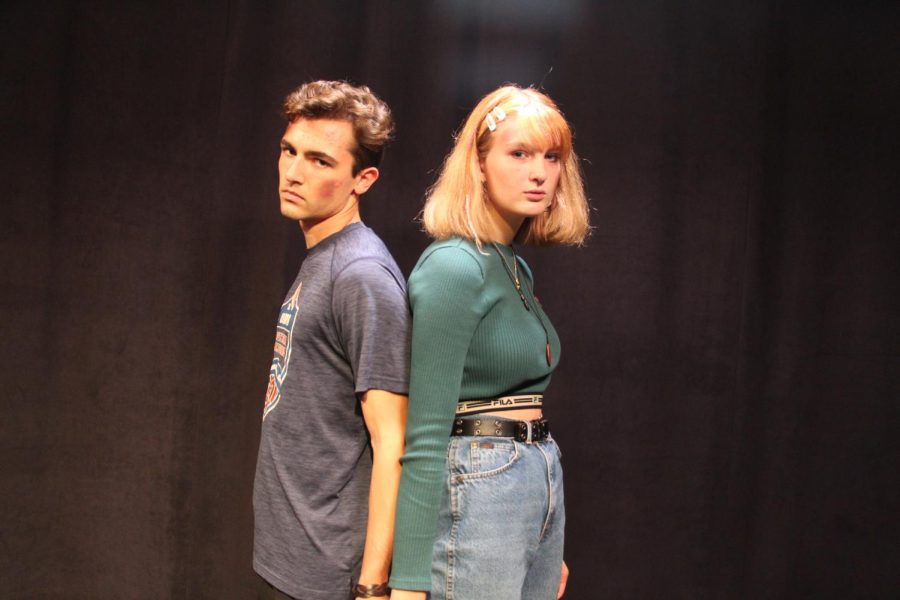 Mac McCarty, junior, and Ivy Potter, junior, portray that both genders can get sexually assaulted.

1. Myth: If they didn’t struggle or fight back it wasn’t sexual assault.

Fact: Every person responds differently to assault. One of the common responses is the “freeze response,” which happens when the victim is physically unable to move or speak during an assault.

Fact: Only up to 2% of reported assaults are false, and around 90% of cases go unreported.

3. Myth: Most sexual assaults are committed by strangers.

Fact: 90% of sexual assaults are committed by someone the victim knows, this is also known as acquaintance rape.

4. Myth: A person cannot sexually assault their partner or spouse.

Fact: If that person does not want an action to be done to them, and the action occurs anyway, that is assault. Nearly one in ten women have experienced rape by someone they know.

5. Myth: Sexual assaults most often occur in public or outdoors.

6. Myth: Rape does not happen that often.

Fact: There is an average of 293,066 victims, aged 12 or older, of rape and sexual assault each year in the United States. This means one sexual assault occurs every 107 seconds.

7. Myth: People that have been sexually assaulted will be hysterical and crying.

Fact: Everyone responds to trauma in different ways. There is are many stress hormones released into the brain and bloodstream when you are in danger, this is called the fight or flight response. This response varies from person to person, no one person will have the same reaction as another.

8. Myth: Men are not victims of sexual violence.

9. Myth: Wearing revealing clothing, behaving provocatively or drinking a lot means the victim was “asking for it.”

Fact: The amount of skin someone is showing is not a substitute for consent.

10. Myth: People who belong to the LGBTQ+ community don’t experience any sort of sexual assault.

Fact: 44% of lesbians and 61% of bisexual women experience rape, physical violence or stalking by an intimate partner; compared to 35% of heterosexual women.

11. Myth: There is nothing we can do to prevent sexual assault.

Fact: The best ways to prevent sexual assault is to talk about it (yes, especially with the people who don’t want to hear about it). Whether it is with your friends, family or someone else you trust, the more you talk about the issue, the more normalized talking about sexual assault will become.

12. Myth: Victims are at fault for the violence that has happened to them.

13. Myth: There is no reason for a victim not to report being raped or sexually assaulted to law enforcement.

Fact: The people who commit sexual assault can be anyone. From your next door neighbor, to the person you pass in the halls everyday.

15. Myth: When people say no, they really mean yes.

Fact: Consent is a huge component in any relationship. Consent doesn’t just apply to sexual assault, consent applies to all forms of relationships. Whether they are romantic or friendly, consent always applies.