Evaluating the problems and solutions of our current school system 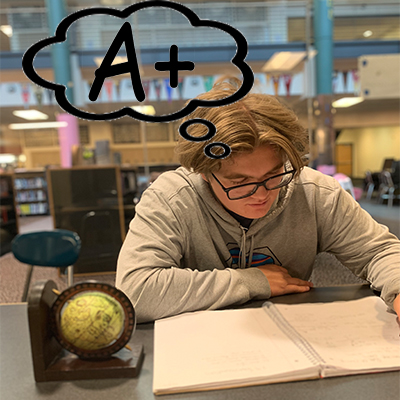 Thor Severson, junior, studies in the library for an upcoming test.

It’s only a quarter of the way through the school year, and students are already feeling burned out and losing valuable necessities for life. They lose sleep, and time that is essential for pursuing goals and interests, which will be vital for their future. And although the school system is supposed to accomplish this goal of finding future careers, it is harshly failing.

The school system has made it so students are more focused on getting a good grade, instead of learning and exploring the material. This is because they are competing with their peers to get into the college of their choice. This hasn’t been the case in the past, as it was common to not go to college and still earn a solid income.

More recently in 2014, a study conducted by Houston’s “Chron” shows that workers with no high school degree earn an average of $30,500 annually. Workers with a bachelor’s degree, however, earned an average of $49,900. These numbers explain why the demand to go to college – preferably a good college – is much higher now.

So the question is, how do students stand out from the rest, to get into their dream college? They take harder classes and get better grades. However, the majority of those classes are “filler” courses, meaning students only take them because they look good on a resume, not because they’re actually interested. That’s a big issue. Students spend roughly five hours per week in each class. That’s a lot of time being wasted. This time can be spent on many more productive tasks, such as exploring their own interests instead of a college’s interest.

In order for this to change, the system of school needs to be adjusted. Core subjects such as English, math, history and science are valuable for students to have. Elective courses, however, should be run on more of a walk-in basis, instead of being locked in to students’ schedules for several months at a time. Electives should be based on career paths, practical paths that will get students willingly involved and motivated to learn, instead of dragging them through the course with their only intention being to do the bare minimum.

Think about all the extra hours this would give students. Not only would it boost morale, but students would be able to find their dream careers early on and have more time to improve their craft. This will not only positively affect students while they are in high school, but more importantly, it will improve the world in the future.

Something needs to be done to change our school system. Students are unmotivated and focused on obtaining a letter grade instead of knowledge that will apply to their future. In order for students to explore their interests instead of the interests of various colleges, the school system needs to be changed.