‘My Year of Rest and Relaxation’

TW: This review contains mention of suicide, depression, substance abuse, eating disorders, and death. The novel itself contains mentions of all of the above as well as abortion, long-lasting illness, and manipulation. If any of these topics are triggering or upsetting to you this may not be the right book for you. 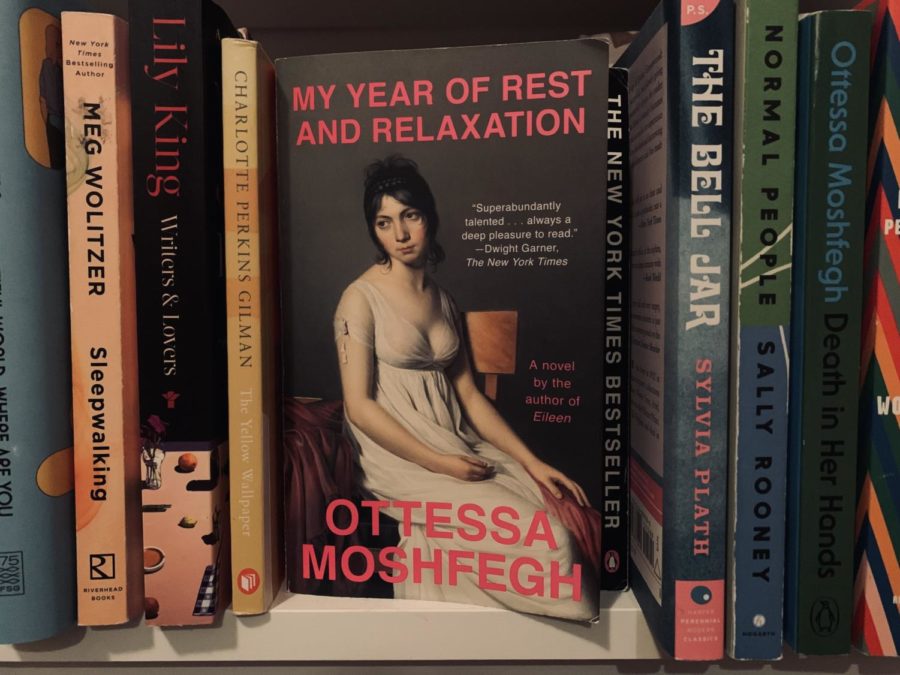 Ottessa Moshfegh's "My Year of Rest and Relaxation," which was published in 2018, has become a pillar of media in millennial fiction.

The millennial fiction genre of literature has become an increasingly influential presence on the internet in the past few years, specifically on sites such as TikTok and Instagram. While authors like Sally Rooney (“Normal People” and “Conversations with Friends”) and Lily King (“Euphoria” and “Writers and Lovers”) are often in the conversation regarding this genre, one author seems to stand above the rest in terms of impact and polarization— Ottessa Moshfegh.

Moshfegh, whose debut novel, “McGlue”, came out in 2014, has become a mainstay in this genre due to her unique writing style and complex sense of character development and creation. Moshfegh saw success somewhat early in her career with novels like “Homesick for Another World” and “Eileen,” but her true emergence into literary infamy came with her 2018 novel, “My Year of Rest and Relaxation.”

Prior to the main events of this novel, the unnamed narrator was a well-educated young woman with a degree from Columbia University and an Upper East Side apartment that she lives in for free. She is considered traditionally beautiful and has an immense amount of privilege. She has everything she could ever need but the hole in her heart is evergrowing.

The novel follows our narrator as she navigates life following the sudden and traumatic succession of her parents’ deaths. With an unhealthy on-again-off-again relationship with her boyfriend and a jealousy-fueled friendship with her college best friend, the narrator lacks a solid support system to guide her through this time. The only person who she feels any true connection with is Dr. Tuttle, a naive pseudo psychologist who provides the narrator with everything she needs to accomplish her goal— to sleep for an entire year.

“Sleep felt productive,” the narrator explains. “Something was getting sorted out. I knew in my heart—this was, perhaps, the only thing my heart knew back then—that when I’d slept enough, I’d be okay. I’d be renewed, reborn.”

The narrator’s flawed plan comes to fruition as she successfully manipulates Dr. Tuttle into prescribing her a variety of sleeping pills. As expected, the execution of this plan is just as flawed as its conception, specifically when considering the people in the narrator’s life who enable her behavior. Trevor, the narrator’s previously mentioned ex-boyfriend, is largely responsible for some of the narrator’s actions and ignores her cries for attention aimed at him. Dr. Tuttle, whose motivations are generally unknown to the reader, is blissfully unaware of the real motivations behind the narrator’s need for these pills. The aforementioned college best friend, Reva, is often too wrapped up in her own head to notice what is happening.

Reva, who expresses her jealousy toward the narrator’s life and appearance throughout the book, suffers from an eating disorder that takes up a lot of her time and attention. Additionally, her mother is terminally ill and is rapidly nearing the end of her life. The narrator’s emotional unavailability and Reva’s constant emotional turmoil create a consistently toxic dynamic between the two.

In the vein of some of its millennial fiction peers, “My Year of Rest and Relaxation” falls into the category of “mentally ill woman makes decisions that harm her and ruin her life” literature. Predecessors to this brand of prose go as far back as “The Yellow Wallpaper” by Charlotte Perkins Gilman and “The Bell Jar” by Sylvia Plath. While both of these works have been lauded for their honest and authentic depictions of womens’ mental health struggles, they also include outdated commentary on the issue. Similarly, “My Year of Rest and Relaxation” has been met with its own set of critiques.

In one Goodreads review, a reader referred to this book as, “Another entry in the baffling ‘women can be a**holes too!’ movement,” commenting on the tendency of readers to excuse the actions of this narrator as responses to her trauma. Others have criticized instances within the text where the narrator makes racist comments about side characters in the novel. The narrator’s often selfish and tone-deaf behavior may be a turn-off for many readers, and her actions may even feel inexcusable.

Whether you love it or hate it, it is nearly impossible to deny that “My Year of Rest and Relaxation” has made a name for Moshfegh as a bulwark in the world of literature and pop culture. If you are looking for similar books, you may be interested in “All’s Well” by Mona Awad and “Nobody, Somebody, Anybody” by Kelly McClorey, both of which further discuss connections between one’s trauma and coping through substance abuse.

For more insights into “My Year of Rest and Relaxation” check out the most recent installment of the West Linn Book Nook Podcast.