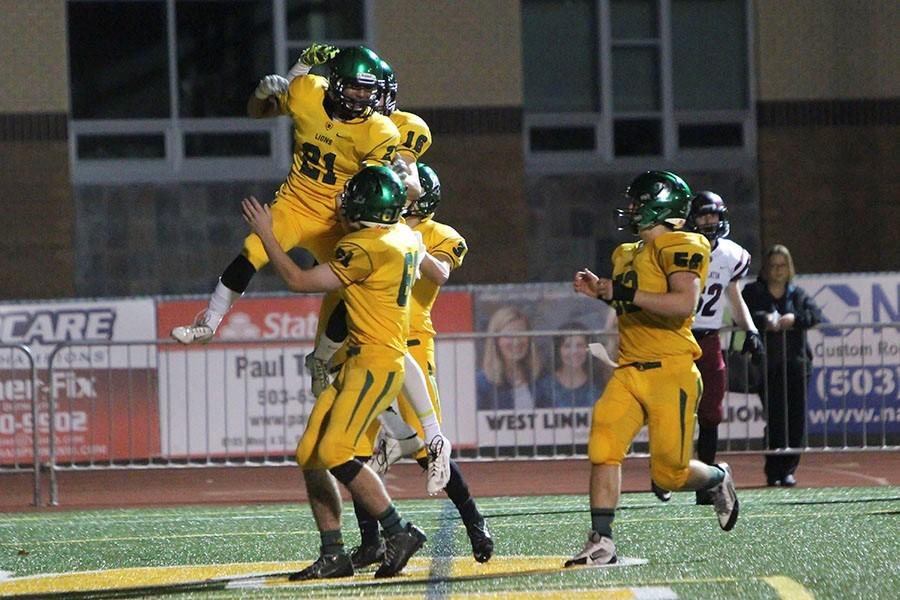 After scoring a touchdown, Qawi Ntsasa, sophomore, celebrates with his teammates. Ntsasa scored the first two touchdowns for West Linn and helped his team win 49-35.

The first score came from running back Qawi Ntsasa, sophomore, receiving a 65 yard pass from quarterback Tim Tawa, junior. Ntsasa didn’t let up as he scored West Linn’s second touchdown, a 25 yard pass from Tawa. However, West Linn’s defense couldn’t repel Tualatin offense as they marched down to score their first touchdown. Successfully going for two points after the score allowed the Timberwolves to gain an edge, leaving the quarter 14-8, West Linn.

After another touchdown pass from Tawa, the teams were back and forth. The score remained in West Linn’s favor throughout the game as the Timberwolves remained steadily behind. The half ended 28-22 after another 53 yard pass to receiver Connor Berggren, senior.

The third quarter only resulted in a touchdown run from running back Elijah Molden, junior. The fourth presented two touchdowns from each team, leading West Linn to a 49-35 win.

“We played together and fought the whole time,” Tawa said. “Everyone did great and worked hard.”