Hour of Code teaches students how to code 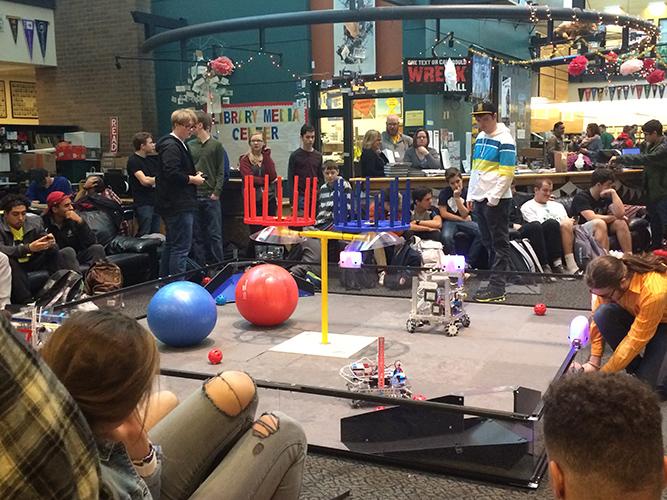 Robotics teams show students the final product of coding by working with their robots in the library during lunch.

Whether students were ready to design a videogame, or simply wanted to understand their computer a little better, the Hour of Code opened its doors to students with a wide range of skill levels.

“We wanted to show the community to not be scared of programming,” Ben Walker, junior, said.

Walker helped put on the Hour of Code along with his AP Computer Science classmates and members of the robotics teams: Brobotics, The Red Hot Techie Peppers and Artificial Unintelligence.

“I’m certainly no programmer, but I do enjoy building and designing machines,” Wiley Weaver, sophomore, said.

Weaver works with the various robotics teams at school, and he only joined because a friend recommended it to him. Since he has joined, Weaver has not only learned how to create impressive machines, but he’s learned how to be a part of a team and learn other life skills that will lead to a future career.

“Besides the usefulness of the skills one might learn, the team aspect and competitive tournament style competitions make the scene much more enjoyable and important to you as a whole,” Weaver said.

In 2013, the Hour of Code was put in place to teach students coding, a skill which isn’t that hard to learn and can be useful in the future. This year the hour was spent focusing on basic coding that was taught through games, so students had fun and it didn’t even feel like they were coding.

“I like coding because you can create anything and you have a blank surface to do whatever you want,” Walker said.

Outside of the regular tournament season for robotics, students are also able to complete their own personal challenge which can be anything from learning a new skill to work on their own independent project. With the Hour of Code, the goal is that this opportunity will intrigue many students to start down the path of coding.