Should Kevin Durant’s first Championship be celebrated? Or is it confirmation of a league wide dilemma?

In Kevin Durant’s return to Oklahoma City, fans heckle Durant with ‘Cupcake’ signs and ‘Trader’ chants from the stands.

Steph Curry dribbled near half court after an impressive win to clinch a title, a Western Conference Title back on May 30th of 2016. Number 35 was stitched in white lettering contrasting a blue Oklahoma City jersey, with the six lettered name ‘Durant’ on the back. Here’s three reasons Durant’s NBA Championship shouldn’t be celebrated, but criticized.

1 – He’s A Sore Loser. There is no debate whether the 2014 MVP is a great player, however critics had a field day on social media in regards to Durant’s decision.

Sure players on opposing teams made their opinions known; however Warrior teammate Draymond Green welcomed the Multi-Year All Star with open arms.

Russell Westbrook was left on his own in Oklahoma City. Throughout the 2016-2017 season media outlets have ‘stirred the pot’ when it comes to the rivalry between Durant and his former teammate. Neither player reached out until reports surfaced that the two had spoken on May 9th of this year.

Imagine this. You’ve been dating this girl for eight years and in comes a stronger, better looking and more successful man. Disregarding your eight year relationship, what you’ve built together and the progress you’ve made; she leaves you for the new guy in town. How do you feel? Like Russell Westbrook.

This is the issue in today’s league. A lack of loyalty both in players and fans alike. Durant’s decision reinforces the severity this dilemma that is infecting the NBA.

2 – Hypocritical Move. Turn back time to when LeBron James made the ‘The Decision’ to take his talents to South Beach. Many were upset when the King put pen to paper, creating the big three of Dwayne Wade, Chris Bosh and James. General managers, coaches, players and fans showed their frustration. So did Durant. 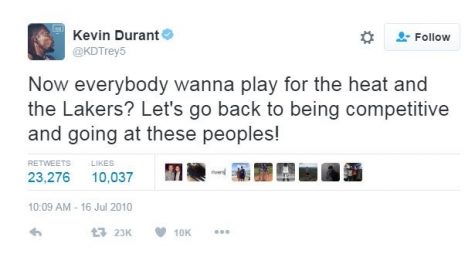 Analysts, commentators and writers have debated whether Durant’s decision to leave OKC was justified. Go back to 2010, and ‘@KDTrey5’ may side with his own critics.

3 – Did Golden State Really Need Him? Averaging just over 114 points per game in the 2015-2016 season, the Warriors finished with the greatest regular season record in NBA history. Without Draymond Green’s suspension in game five of last year’s Finals, Steve Kerr and the team from Oakland may be hoisting their second consecutive title.

Four All Stars took the court in front of their home crowd on Monday night. Before Durant’s move there were three. Two former MVP’s, one of them the reigning, played together torching a Cleveland defense in pursuit for a title. What do we call this? Ring chasing.

Without Durant’s zip code change, the Warriors would have still been favored in the eyes of many. Ratings in this year’s Finals were at an all time high, with more than 30 million viewers glued to their televisions. Don’t expect the league to change their policies regarding the creation of super teams. However, be prepared for other superstars to follow LeBron and Durant’s path in hopes of winning a championship.