Scheduled after-school activities screeched to a halt late on Jan. 9th as fire alarms began blaring in the Performing Arts Center. A West Linn fireman at the scene explained that a machine in the P.A.C. had malfunctioned, causing the smoke.

Students, such as freshman Gabriel lee, who were in music lessons at the time of the alarm, were confused and surprised when they began to smell smoke.

Lee was practicing in his drum lesson. “I started to smell smoke, and then the janitor rushed into the P.A.C. carrying a fire extinguisher.”

All students, faculty, and staff were evacuated from the P.A.C. as well as the main building, halting activities such as the middle school musical rehearsal, jv and jv2 basketball games, and the drivers Ed. class. 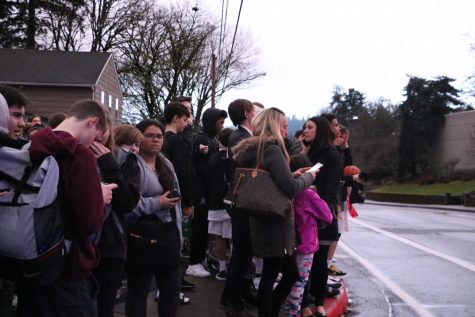 Students gathered across the street from the fire. Many took shelter from the rain under the roof of the church.

Ann Van Bever, Oboe teacher, had been preparing for a lesson at the time of the evacuation. “I hope my stuff doesn’t get ruined. I didn’t think to get my glasses before I went outside and I can’t drive home without them.”

Principal Kevin Mills tweeted out at 4:54pm, “Fire department is responding to an alarm at the school. All people are safe and evacuated. School is closed at this time.”

Students stayed outside for around 45 minutes before Kevin Mills tweeted later at 5:21, “The main building is reopen. All lower level sports have been canceled. Varsity game tonight will still play. The P.A.C. will remain closed until further notice.”

Kevin Egan, band teacher, sent out an update on Google Classroom at 5:50, “No Pep Band tonight due to the fire (NO DAMAGE) in the Perf. Arts Center. See you tomorrow!”

He updated again later that night, “Fire is all put out. There are classes tomorrow in the P.A.C.”