As teenagers are lumped into over-broad stereotypes, adults neglect the impact they can make 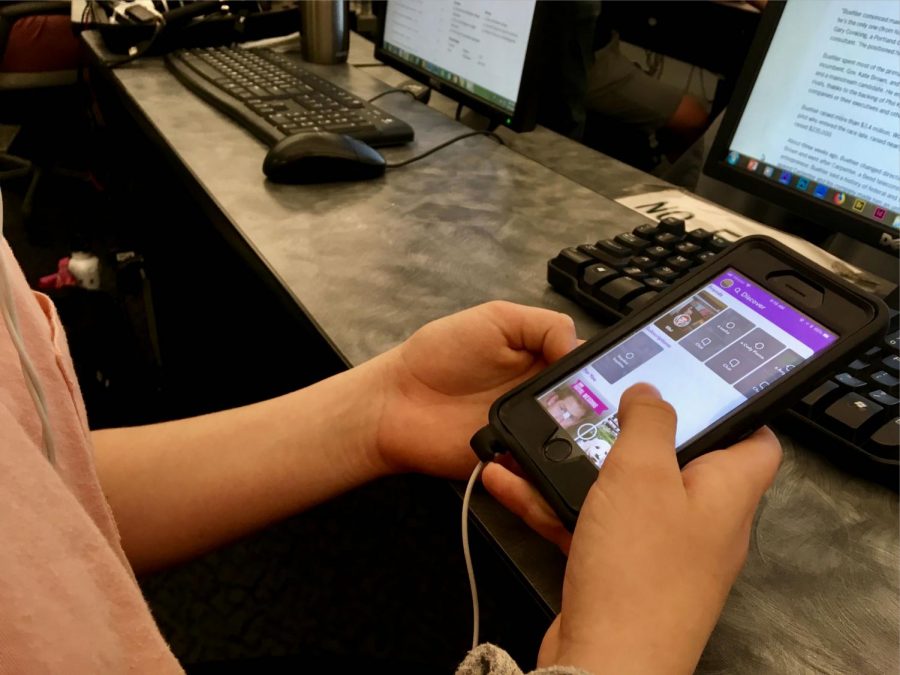 As kids continue to focus on Snapchat instead of class, this perpetuates the negative perception of Gen Z'ers.

Every day as I sift through the throng of my teenage peers walking down the halls of the high school, it’s hard to miss the students peering at their phones or blankly texting while walking. While this doesn’t immediately make anyone guilty, as I watch and observe, I often find myself thinking: how much does the amount of time we spend on our phones affect others perceptions of us?

As a generation that loves to be lumped into the over-broad assessment of Millennials by those older than us despite the fact that we miss the mark by several years, it’s hard to forget where today’s teenagers stand in the eyes of the rest of the world. You can see it in the titles of newspapers, on the headers of websites, and on the faces of those older than us that they believe we are succumbing to a world of social media they cannot completely understand. Teens spend upwards of 5-6 hours on their phones so the stigma surrounding teenage media use may not be entirely unjustified. I often find myself ashamed of myself and my peers for our seeming dependence on media, often feeling embarrassed and dismayed by the decisions we seem to be making and what we are prioritizing.

When I sit at the bus stop with two girls I’ve barely spoken two words to the whole school year as they absentmindedly look at their phones, sending Snapchats and scrolling through Instagram, I find myself incredibly at a loss. Social media is often described as isolationist, creating gaps in our face-to-face interactions, as a crutch to avoid actual social skill development. While there are reasons why this isn’t true, in these empty moments, I can’t help but believe it.

In many ways social media is meant to connect. Clearly, that was what it was made for. Despite the availability of connectivity at our fingertips with people we may or may not know, it’s no surprise this forces some of us to absorb ourselves in a life that isn’t truly the one you’re living. We can get so easily absorbed with what our friends are doing even just classrooms away that we’re not entirely present with our surroundings. To some degree we live up to these stereotypes. But as those older than us continue to smash and degrade our benefits to society, it’s quickly becoming another sadly common generations conflict.

As a person that falls within Generation Z, which is the time period between 1995-2012, I’m rapidly feeling the effects of the stereotypes and perceptions those older than us are implementing. The impact of social media on growing teens is shaping the world every day, spreading information, creating new culture, and forming the future.

Despite this, parents, adults, those older than us and even members of Gen Z themselves, continue to preserve ideals that we are the “Snapchat generation” saying that “We are so used to hiding behind our cracked screens and dog filters that we don’t even know how to communicate with our peers” in articles like college student Amelia Butler’s piece for Odyssey. Because of these perpetuating ideas, it’s not a shock that this narrative is spread everywhere and is commonly accepted. Despite the inherent truth in these statements, it seems that this methodology of separating the so called “Snapchat generation” that we exist in from the rest of the world, is rapidly creating an age old generation divide with a new more expansive, technological focused twist.

Generation gaps are not new news. The gaps that develop between the young and the old are nearly inevitable as times change and those that are older, relinquish the mass population up to the climbing numbers of the more free-thinking youth. Whether it’s a discrepancy between the war-torn fifties and the prosperity in the sixties or the one now, behaviors and attitudes are shaped by the world we grow up in and who we are surrounded by. We shouldn’t be discouraged for that.

It’s true that we as the adolescence of the world reach adult age, things will change, likely becoming more technologically focused. But the fact that we thrive in an online world, does not diminish the fact that we will have a profound effect on the rest of the world, one that may successfully globalize the world in a way that we never could do before.

The variances between generations are crucial to changing the way we as people see things. Often under-appreciated and dismissed as inconsequential in the name of preserving the archetypes of generations before us, Generation Z skills are critical in the changing world. Harnessing old-fashioned skills in innovative new ways such as using the relatively uncharted territories of social media to understand people and spread ideas, Gen Z’s influence is widening.

As one of the most globalized generations of all time due to the connectivity derived from the internet, we’re allowed to perceive our own ideas, craft our own opinions, and comprehend what the rest of the world looks like around us. Unity is a powerful tool and this unity that social media and the internet has the ability to create, should be enough reason to overcome the sometimes problematic usage of social medias like Snapchat.

Growing up in one of the most diverse environments of all time while also learning in a highly sophisticated learning environment, thanks to advancing technology, Gen Z arguably has some of the best opportunities for change of any generation. Shrouding the Gen Z name in thinly veiled satires of who we are and demeaning our existence as one that exists as only “the Snapchat generation”, are contributors to the mass misconception that we are nothing but technology-hypnotized young adults and teens who have nothing to offer. As the mass of Gen Z’ers moving into the workforce will soon outweigh the Millennial, it’s time those older than us stop denying our potential impacts with crude and stereotypical jokes, and embrace that we can, and will, change the course of the future.