Candidates Parrish, Prusak, and Paulson lay out visions for Oregon 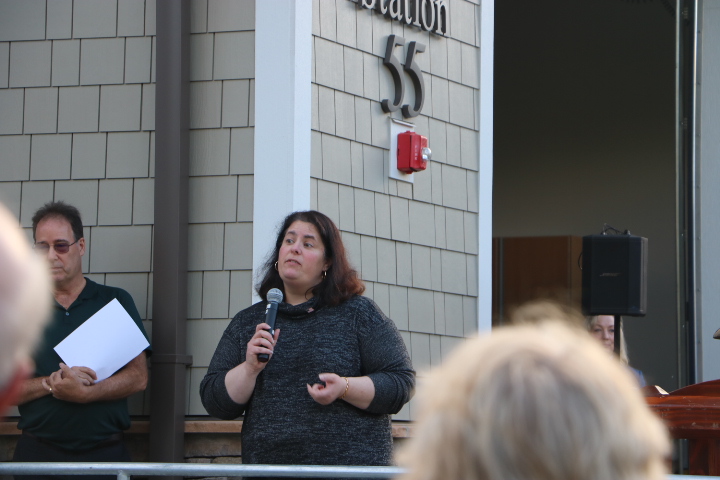 State Representative Julie Parrish speaks about her experience as a wife of someone who served in Iraq.

Editors note: The author of this article has volunteered for Rachel Prusak’s campaign

Candidates for the Oregon state legislature attended a forum in the Performing Arts Center on Wednesday, Oct. 17.

The candidates, invited by West Linn students answered questions on student issues such as gun control, and mental health, as well as statewide issues, like immigration and taxation. The candidates were first interviewed by a panel of students, before turning to audience questions.

Parrish, who has represented West Linn for eight years, was a surprise replacement nominee in her first race. In 2010, she stepped in for the Republican primary winner Cheal Summon, who stepped aside for legal reasons. She went on to win in 2010, 2012 and 2016, during which time she has developed a reputation as a budget hawk, working to lower taxes and balance state spending, and controversially leading a campaign to cut spending on healthcare.

Prusak, a nurse practitioner working in West Linn, claims she was inspired to run by that ballot measure.

Holding on to Parrish’s seat, in a district that voted for both Hillary Clinton and Barack Obama, is of vital importance for state Republicans. Democrats are one seat away from a 3/5ths supermajority in the house that would allow them to pass spending and tax increases without any Republican support.

In contrast to the close fought battle brewing in House District 37, the race for State Senator was long considered a sure thing. Democrats have controlled State Senate district 19 since 1982, and Senator Richard Devlin was considered so entrenched that Republicans failed to field a candidate to oppose him in 2014.

However, in 2017, Governor Kate Brown appointed Devlin to a position on the Northwest power and Conservation Council. His replacement, Teachers union organizer and Vice President of Pacific Community college Rob Wagner, was not in attendance at the forum. His opponent, GOP nominee and civil engineer David Poulson, had the opportunity to advocate for his views without reply.

The event was attended by students, teachers, parents, and community members curious to hear from their local politicians for the first time.