Spooky book recommendations to get you into the Halloween spirit 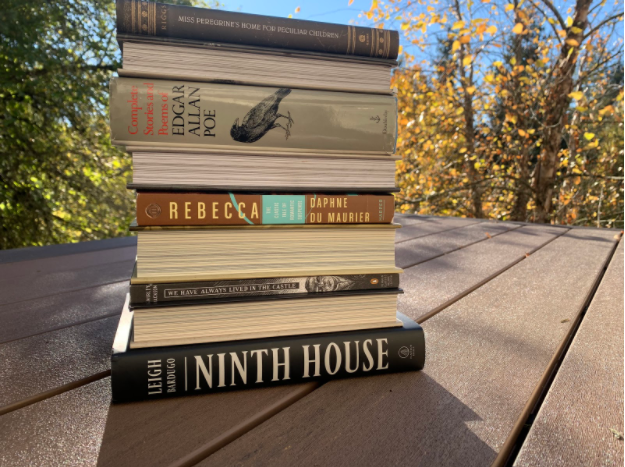 In a series of letters to his sister, Robert Walton, the captain of a ship going to the North Pole, he recounts his journey when traveling. He meets Victor Frankenstein, and along the way, Frankenstein tells Walton of the monster he has created. This genre-defining horror story is a must-read during the season.

“Everywhere I see bliss, from which I alone am irrevocably excluded.”

In this gothic novel about the character Count Dracula‘s search for new blood and attempt to spread an undead curse leads away from his home of Transylvania to England, which is the catalyst for the story. A quintessential vampire story, “Dracula” is sure to get anyone in the Halloween spirit.

“The world seems to be full of good men-even if there are monsters in it.”

In this classic story of romance and intrigue, a young woman spontaneously marries Maxim de Winter, a wealthy widower, whose previous wife died the year before. The unnamed heroine of the story goes to live with her new husband at Manderly, his home filled with remnants of his past life with Rebecca. The longer Mrs. de Winter spends in Manderly, the more the tumultuous events of her husband’s earlier years come to light, and the more she regrets her decision. A classic and eerie tale, “Rebecca” is an excellent story to get you into a spooky mood any time of the year.

“A dreamer, I walked enchanted, and nothing held me back.”

“We Have Always Lived in the Castle” by Shirley Jackson

In this novel, we follow eighteen-year-old Mary Katherine “Merricat” Blackwood who lives with her sister and uncle in Vermont. Six years prior to the events in the book, tragedy strikes, leaving these three characters isolated from the rest of their town. Throughout the book, we find out what happened, and why. “We Have Always Lived in the Castle” is the perfect story for anyone who wants an eerie mystery with a very laid back pace.

“I can’t help it when people are frightened. I always want to frighten them more.”

“The Merciless” by Danielle Vega

If you’re looking for a YA horror novel during the season, then this book might be for you. We follow Sofia Flores, a high schooler who makes friends with Riley, Grace, and Alexis on her first day of school. When Sofia first met them, she thought they were well-intentioned people and would be good friends. This turns out to be far from the truth.

“Some people have evil inside them, but that’s what God is for, to fix them when they can’t fix themselves.”

Jane McKeene was born two days before the dead began to walk on the battlefields of Gettysburg and Chancellorsville. During this book, Jane adjusts to a new life with the undead, battles racism and discrimination, and trains to become an Attendant. This book is perfect for those looking for an undead thriller this fall.

“See, the problem in this world ain’t sinners or even the dead. It is men who will step on anyone who stands in the way of their pursuit of power.”

Jacob Portman was always perfectly normal until one fateful day when a family tragedy changes his life. He soon finds himself traveling to a remote island off the coast of Wales. It is there that he begins to uncover secrets from his grandfather’s past that were always hidden in plain sight.

“I used to dream about escaping my ordinary life, but my life was never ordinary.”

Coraline and her family move into a new house expecting a safe and normal environment but are shocked by what they find. While Coraline is exploring her new home, she discovers that there’s a passage to a home just like her own. As soon as she ventures into this mystery flat, she finds a scary reality. Coraline is a perfect story for anyone who wants a fantasy-like atmosphere that keeps you interested until the very end.

“Being brave doesn’t mean you aren’t scared. Being brave means you are scared, really scared, badly scared, but you do the right thing anyway.”

Carrie White has always felt like an outcast in her hometown. From her extremely strict and religious mother to her cruel classmates who bully her for her shortcomings. When one of the bullies feels bad for her past actions, she tells her boyfriend to take Carrie to prom. This is a great book for fans of classic horror. The combination of King’s haunting writing with a gripping plot makes “Carrie” a perfect book for this season.

“She did not know if her gift came from the lord of light or of darkness, and now, finally finding that she didn’t care which, she was overcome with almost indescribable relief, as if a huge weight, long carried, had slipped from her shoulders.”

Loosely based on the Manson Family cult murders of 1969, “Family” explores a fictionalized cult whose dark secrets are masked by the family-like persona that is portrayed by its leader and followers.

Galaxy “Alex” Stern is an unlikely member of Yale’s freshman class. Following her tumultuous teenage years, including being the lone survivor of a multiple homicide, Alex is given another opportunity to get her life together. Now, Alex has been tasked with infiltrating the university’s secret societies and exposing its dark past.

“I want to survive this world that keeps trying to destroy me.”

Based on the “Sabrina the Teenage Witch” comics, “The Chilling Adventures of Sabrina” follows Sabrina Spellman as she gets used to being a witch while also trying to be a normal teenager. The story takes place the summer before her sixteenth birthday, which she knows is the last stretch of normalcy in her life for a long time.

A classic in the short-story genre, “The Tell-Tale Heart” tells the story of a man suffering from “over-acuteness of the senses” who insist on being perfectly sane. The unnamed narrator is haunted by the old man with the “vulture eye” and is wracked by grief after committing a heinous crime. As the story progresses, the reader will start to feel as if they are going insane along with the narrator, which provides for a unique and memorable experience.

“True, nervous, very, very dreadfully nervous I had been and am, but why will say that I am mad?! The disease had sharpened my senses, not destroyed, not dulled them. Above all was the sense of hearing acute.”