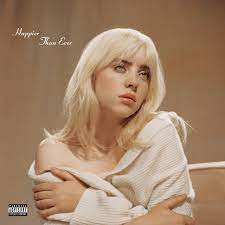 Happier Than Ever by Billie Eilish

Happier Than Ever – Billie Eilish (Album of the Year)

“Happier Than Ever” parallels Eilish’s debut album in its message, but moves in a new direction sonically. Combining synth beats and traditional jazz rhythms creates a sound that’s genuine, unique, and far more romantic than anything from Eilish’s past discography. In the album opener, “Getting Older”, Eilish alludes to the celebrity interview process, by intoning, “Can’t shake the feeling that I’m just bad at healing/ And maybe that’s the reason every sentence sounds rehearsed”. “Getting Older” is also juxtaposed with “Everything Will Be Alright” by the Killers, further adding a darker element to the track.

The titular track begins as a stripped-down acoustic song, with bitter and hurt lyrics. Two minutes in, the music crescendos into a pop-rock ballad, turning into a sound that almost seems like a completely different song in comparison to the start. “Happier Than Ever” is a song of reckoning with a toxic relationship, and it serves as the backbone of the album’s popularity. Other hits off of “Happier Than Ever” include “NDA”, a song about the entrapment of fame within the public eye, and “Therefore I Am”. Both are more synonymous with Eilish’s previous work. For fans of her debut album, the latter is the most intersectional of all of the tracks on “Happier Than Ever.” With a fresh start, including remnants of her old sound, Eilish’s sophomore album is one to remember.