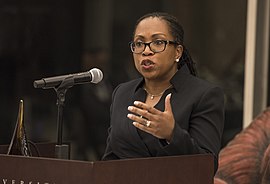 Ketanji Brown Jackson will replace Stephen Breyer when he retires from the court's term.

Judge Ketanji Brown Jackson is the first Black woman to be confirmed in the Supreme Court. On Friday, April 7, the 53-47 final vote scores showed support for Jackson. Three Republicans joined the Democrats to confirm Jackson to a lifetime appointment on the high court.

¨It has taken 232 years and 115 prior appointments for a Black woman to be selected to serve on the Supreme Court of the United States,¨ Jackson said in a speech outside of the White House.

Jackson’s speech was followed by a conclusion made by President Joe Biden and Vice President Kamala Harris, who both praised Jackson for keeping her composure throughout the confirmation process.  Jackson was finally confirmed on a vote of 53-47, from three Republicans joining all 50 members of Democrats.

¨There was verbal abuse, the anger, the constant interruptions, the most vile, baseless assertions and accusations.¨ Biden said on Friday while adding that she showed poise through the large amount of time for a more than 20 hour confirmation hearing.

Jackson will replace Stephen Breyer when he retires from the court’s term. Breyer is 83, retiring from the court after being an associate justice for nearly 28 years. Though Jackson is confirmed to the court, she will not become a Supreme Court associate justice until Breyer steps down later this year. When Breyer steps down, that is when she will take her judicial oath and become Justice Jackson.

In order to be confirmed, Jackson endured more than 23 hours of questioning over just two days of confirmation hearings in that committee last month. Democrats sought to defend the judge while Republicans made accusations about Jacksons sentencing record and on her judicial philosophy.

Now with Jackson’s confirmation to the Court, she is becoming a bigger role model than she already was, particularly to younger Americans. She says it is a ¨huge responsibility,¨ but Jackson says that she feels she is ¨up to the task¨ because her own role models encourage her to keep up the work.

¨For all the talk of this historic nomination, and now confirmation, I think of them as true path breakers,” Jackson said. “I am just the very lucky first inheritor of the dream of liberty and justice for all.”