Five-time state champion choir director Aubrey Patterson sits down with seniors Ellie Seward, Karah Rhoades, and Ty Walters to talk success and the moments that made the choir season. 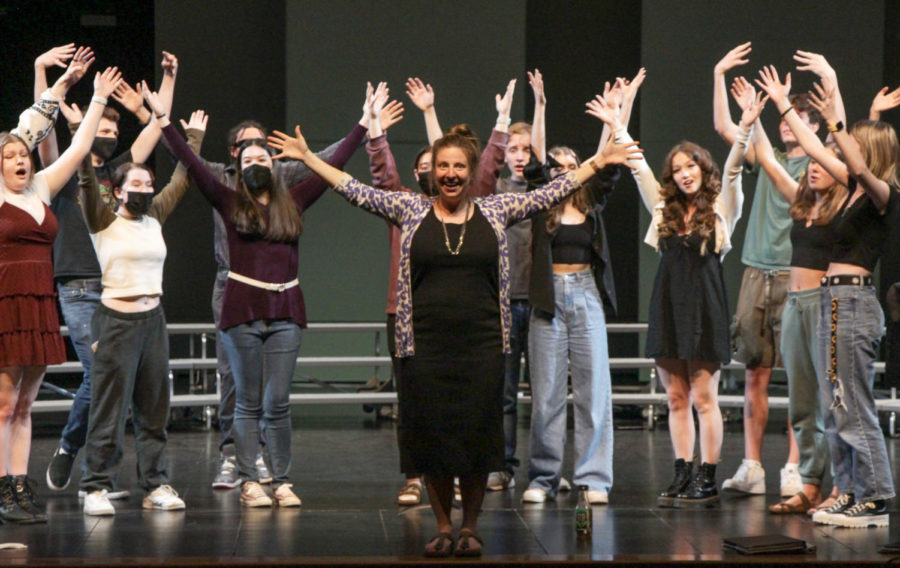 Aubrey Patterson leads ensemble group Fresh Pitch in a medley of Queen songs for a choir concert on June 6.

AP: What were some of the most memorable moments of our festival season? So like January, until now.

AP: For me, it’s bringing in one of the composers that was the highlight for me. Caroline Shaw came in and was able to work with us onto her piece.

TW: Yeah, working with Caroline Shaw was so wonderful. I was really scared. I was talking with Ben. I was like, ‘Please don’t be the Gordon Ramsay of music.’ And she was so lovely. That was super awesome.

KR: Yeah, I feel like the song wasn’t a spot that we thought was good either. And I was scared she was gonna be like, ‘Oh.’

AP: That was pretty aggressive. We picked that up in about a month. Another eight part piece that is not high school appropriate. It’s college, beyond, adult professional choir and I was like, I don’t care if she’s coming. I really want to do this piece. So we kind of shoved our way through it, but we got to a really musical place. Um, other moments?

ES: Right after we performed was my favorite, I think.

KR: Yeah, yeah. I mean, Solo and Ensemble, if that counts here. Yeah, I think that’s more like Fresh Pitch, that’s our smaller choir but we went to solo ensemble and we had a group in every category go to state and we placed really well at state and that was really exciting. And I know I was doing a duet with one of my best friends and at state we were a little more competitive. But after districts, we had no expectations for ourselves. And after we perform like we just had so much fun on stage and afterwards, it was like super fun. But state, we had a lot more expectations. So then we were not as happy but it was fun. It was fun.

ES: This memory plays in my head. It was right as they were announcing the placements for the large groups. And they said third and second, and we were all looking at each other and there’s just this like a very sweet mom who’s sitting right behind me. And she went, ‘Oh, get ready West Linn.’ And then they said our name. I just keep thinking about that, I think it’s funny. I also think it shows all the work that you’ve put into everything, like people hear West Linn, and they’re like, oh, yeah, it’s like because the work that you put in and that’s really awesome.

TW: I remember so vividly. This plays back in my head. Me and Ben looked at each other and we were like, ‘well we performed.’

TW: We were like, well, I was like, I think we either crushed it or I did everything wrong.

TW: Like I was so tuned into the music that I either got it all, everything bit by bit, or I just totally botched the round. Those are the only two outcomes.

KR: So OSU, the space we were in was so hard to hear as a choir. Yeah, it’s easier to just lhear yourself. And so lI couldn’t really tell what we sounded like as a group [and] if we’d done good or not. So, after we performed, Victoria [Garcia] was like, ‘how do you think we did?’ I was like, I really don’t know. I can only hear myself.

ES: So true. I was so afraid because I could only hear myself in that space and every time you looked in my general direction, I’d think, ‘I’m too loud.’ I was so panicking over it. I actually thought that it was awful.

ES: I was [thinking] since we know the music so well. I had every single tiny minor mistake that no one else [could] hear but we can hear. I was like, beating myself up. And then I saw the people stand and I was like wait, what did we sound like? It was either awful or amazing.

TW: The entire time I heard two tenors going sharp through. The second time we were supposed to be crescendoing, I was sitting there. I was like, ‘I have no way of telling them that they’re so sharp.’ And it was the only thing I can hear and I was like, I’m so scared right now.

AP: I weirdly got overcome and I never get emotional.

AP: It was weird, and it never happens and it was just like an upwelling of emotion.

KR: You were like, ‘my career’s done!’ You also told us [about] morning choirs and you hyped us down in the morning.

AP: No morning choir has ever won.

ES: You kept it real.

AP: This has never happened. [It’s] always from the last evening blocks are the top five and the rest of them were, except for us. So yeah, in what ways has choir evolved for you?

AP: Over time in choir, maybe that counts middle school, like what’s changed for you?

TW: All the way back. Wow, if we go all the way back. I remember in choir class. We used to play the marimbas in elementary schools a lot. It feels like everything has changed but everything’s still the same as well.

AP: Or maybe how you have changed as a result?

TW: Oh, how I’ve changed. I mean, even like the last year I became so much more confident in my voice. Like up until junior year, I was just so afraid of singing. I don’t know what changed something in senior year. It finally just clicked for me and honestly I’m just gonna say and it turns out I wish I had been like that earlier in my years.

KR: I think being confident in your voice is definitely a big thing like Kiger was my older brother and he was really good. And everyone was talking about his vibrato and I thought it was really good and like I never had vibrato. Until like the end of my sophomore year, I didn’t think I was good until I developed my vibrato. So I don’t know, I think that that was a big thing. I don’t know, I feel like confidence is like the main thing I can think of.

AP: That feels like it has to come from within for y’all mostly.

KR: Like the people we’re surrounded with build our confidence like Bridgitte like sophomore year. I think that people [and] like the culture was really good. Yeah. And people definitely brought us up a lot.

AP: And then as y’all know, I was talking to you a lot about wanting to create musical experiences that will shape your life that you have to look back on as touchpoints forever, at a high level, at a young age, that’s incredibly important. I only had that through piano, I never had that in a group setting in a choir. So going out into your future, what role do you think music will continue to play?

ES: I’m also gonna continue in music, performing arts in general, and I think the thing, the main takeaway from being a part of this choir and continuing in music is all the choirs and theater things that I had been involved [in] previously. It was like, oh, yeah, this is fun, but there’s always that underlying tension of like, this is competitive. Yeah, if we want this or that we have to be better than other people and that wasn’t fun like having that constant layer wasn’t fun. But being a part of this group made me think like, oh, not everything has to be competitive. Like, as long as I perform to the best of my ability and I’m happy and proud of my work, that’s all that matters. And I don’t need to worry about ‘oh am I better than them? Are they better than me?’ Because like, I’ve lost that mindset.

AP: And you’re in such a good position to go be effective and amazing in another choir. And my hope for all of you is that this isn’t the highest musical experience of your life. This is your youngest, wonderful musical experience and you go on to have experiences and even better choirs. You should be a part of even better choirs.
Print copies of the senior edition of the Amplifier magazine are now available. Editions are available in most classrooms.