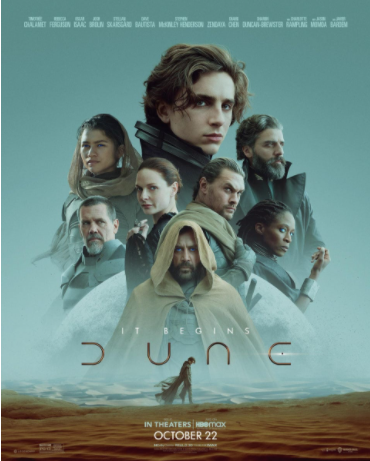 The sands of time may shift, but 56 years after its first printed edition was released, “Dune” is still one of the most critically acclaimed science fiction novels ever written. Inspired by the sand dunes of the Oregon Coast, a standard edition of “Dune” by Frank Herbert is a little over 800 pages of interstellar drama, with all of the trappings of an Ancient Greek epic, set roughly 20,000 years in the future. Its complex universe—  defined by warring houses, enhanced human computers, mysterious pseudo-religious organizations, and other futuristic entities—  is ruled by an emperor who is slowly losing control of his empire, as the houses around him gain political clout and influence.

As the inaugural winner of the Nebula Award for Best Novel, “Dune” has sold over 20 million copies and been translated into 14 of languages. It has had a clear influence on the original “Star Wars” trilogy, as well as the universe of “Game of Thrones”. Despite the success of these franchises, “Dune” itself was considered unfilmable for decades leading up to and following the first film adaptation in 1984.

After multiple attempts to adapt the novel failed, the 1984 movie, directed by David Lynch and starring Kyle MacLachlan, finally made it into theaters, only to be critically panned, failing to make back its $40 million budget. Later, a limited TV series on SyFy, released in 2000, would attempt to break the curse. However, unlike its predecessor, instead of becoming infamous, it faded into obscurity and was largely forgotten. Now in 2021 a second “Dune” film adaptation has premiered to critical acclaim and a box office total that would have paid the entire budget of the original in its opening weekend. The success of this new adaptation begs the question, why did the original fail when the remake has been so well received by both critics and the general public?